Marine environment is populated with organisms. Scientists use their molecules to create tomorrow’s drug. But how are they identified and transformed into drugs?

The workshop will take place on Friday 17th November for the students of Knocknacarra National School.

From the Bottom of the Sea to the Pharmacy

Did you know scientists were exploring the deep seas on the lookout for new drugs? With the workshop “Marine Biodiscovery: from the Bottom of the Sea to the Pharmacy”, the audience will learn about the potential of marine organisms as drug sources. What are the different steps of Marine Biodiscovery, from the discovery of marine biodiversity to marine-derived drugs and chemical studies? 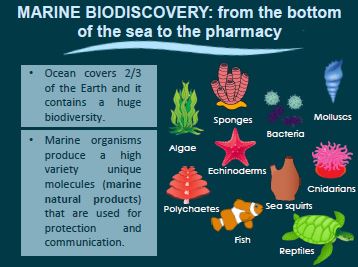 Prof. Olivier Thomas: I started my career in Paris, with a PhD in medicinal chemistry at University Paris Descartes (2002) and a two-year postdoc in protein biochemistry at CEA Saclay in France. After that, I worked at the University Nice Sophia Antipolis-France first as a lecturer then as a professor (2012). In 2015, I was appointed Professor in Marine Biodiscovery at NUI Galway. Dr. Miriam Reverter: I studied Marine Science in Spain and obtained a Masters in Bioactive molecules in Perpignan. I obtained my PhD on Biodiversity, Genetics and Evolutionat the Ecole Pratique des Hautes Etudes (Perpignan, 2016). I arrived in Ireland in March 2017 to do my post-doct working on marine chemical ecology and marine biodiscovery.

What are you working on?

The Marine Biodiscovery group at NUI Galway has a strong expertise in the discovery of new molecules produced by marine organisms like sponges, cnidarians or other microalgae for different purposes. The main applications are the pharma industry and the cosmetic sector but we also try to understand the role of these small molecules in the functioning of marine ecosystems through the use of metabolomic tools (which allows the study of small molecules).

In this context we are managing a National Marine Biodiscovery Laboratory at the Marine Institute, Oranmore. Through different programs like Harnessing our Ocean Wealth, Ireland is in the forefront of the Marine Biotechnology sector and we are contributing to the success of this sector nationally and at the European level.

Workshop organised by Prof. Olivier Thomas and Dr. Miriam Reverter, with the support of the Embassy of France in Ireland.

More information about Science Week can be found here