Home > Culture and Science > Sciences & innovation > Who we are : the Scientific and Academic Service > Our past events and archives > Events: archives > 2004-2010 Events > 2007 Conference: "Large Random Systems"

The Royal Irish Academy and the French Embassy in Ireland are pleased to welcome Professor Wendelin Werner, Fields Medallist 2006 ,who will give a lecture in English on Wednesday 16th of May 2007 at 6pm in Academy House, 19 Dawson Street, Dublin 2.This lecture, entitled ’Large Random Systems’, will look at the link between probability theory and statistical physics.Probability theory and statistical physics are concerned with the understanding of big systems that are built out of a large number of random microscopic inputs. Professor Werner will outline some examples in order to illustrate the different types of possible behaviours of such large systems, focusing in particular on two-dimensional models, that turn out to be closely related to various branches of mathematics.

Professor Werner was born in Germany in 1968 and acquired French nationality in 1977. He is a former student of the Ecole Normale Supérieure (1987-1991). After working as a researcher at CNRS (1991-1997), he was appointed professor at the Université Paris-Sud 11 in 1997 and has since continued his research at the Laboratoire de mathématiques of the Orsay Faculty of Science (Université Paris-Sud 11/CNRS joint unit).

Professor Werner’s work straddles the dividing line between physics and mathematics, introducing new ideas and concepts combining probability theory and complex analysis for understanding the critical phenomena in certain phase transitions (such as the transition from liquid to gas).The work rewarded by the Fields Medal is especially focused on stochastic Loewner evolution and the geometry of two-dimensional Brownian motion. Alongside colleagues Gregory Lawler and Oded Schramm, Werner particularly helped to confirm the predictions put forward by physicists based on the conformal field theory.

Professor Werner has received several international awards, including the European Mathematical Society Prize (2000), the Fermat Prize (2003), the Loève Prize (2005) and the Polya Prize (2006).Wendelin Werner is France’s ninth winner of the Fields Medal and the third to represent the Laboratoire de mathématiques of the Orsay Faculty of Science, one of the flagship laboratories in worldwide mathematics research.

This lecture is open to the general public upon prior reservation: by telephone 01-676-2570 Ext. 236 or email lecture@ria.ie 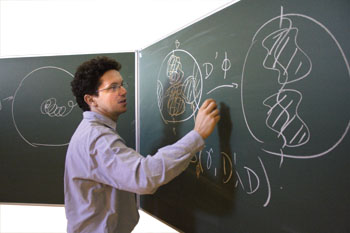