Home > Culture and Science > Sciences & innovation > Who we are : the Scientific and Academic Service > Our past events and archives > Events: archives > 2004-2010 Events > 2008 Official Launch of the National Centre for Franco Irish (...)

2008 - Official Launch of the National Centre for Franco-Irish Studies

The National Centre for Franco-Irish Studies at the Institute of Technology Tallaght has been officially launched.

The National Centre for Franco Irish Studies (NCFIS) is an Institute Research Centre directed by Dr Eamon Maher and located at the Institute of Technology Tallaght (ITT Dublin). 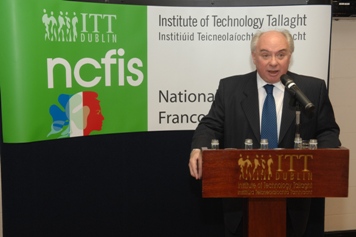 The aims of the NCFIS are broadly the following:

To act as a conduit for research into the historical, literary, spiritual, cultural and other links between France and Ireland.

To organise annual conferences at which these links can be discussed and to publish a relevant selection of the papers from these conferences.

To attract postgraduate students to carry out research on areas directly related to the core activities of the Centre.

To develop research networks between third level institutions in France and Ireland with an interest in all things Franco-Irish.

The Centre aims to contribute to the public debate by putting into perspective general issues such as infrastructure development (transport, health, education), immigration, flexibility, entrepreneurship, and by comparing the French and Irish approaches to these issues and what could one country learn from the other on ways to tackle these issues.

On the board of the NCFIS are professors and researchers from several universities and research institutions in Ireland (DCU, UCC and UL) and in France (Lille 3 and Rennes 2). Several high-level conferences have already been held, which resulted in the publication of numerous research articles and conference proceedings.

The Centre is also heavily involved in undergraduate and postgraduate teaching and research, with several early-stage researchers conducting Masters, Ph.D. and postdoctoral work, in a work-conducive environment. This is of paramount importance in order to nurture a new generation of academics in the Franco-Irish studies field.