Home > Culture and Science > Sciences & innovation > Who we are : the Scientific and Academic Service > Our past events and archives > Events: archives > 2004-2010 Events > 2009 Servier Award for Medical Research Awarded to Professor (...)

The Ireland Fund of France in conjunction with French pharmaceutical group Servier and the Royal College of Surgeons in Ireland (RCSI), has awarded the fourth annual Servier award to Professor Dermot Kenny, Director of the Clinical Research Centre at RCSI and Beaumont Hospital.

Named after Dr Jacques Servier, the founding President of the Servier Group, this scholarship aims to promote and encourage scientific exchange between the medical community, health care industry, universities and research organisations particularly in the field of therapeutic research. It also represents another initiative in furtherance of the Ireland Fund of France’s mission to enhance Franco-Irish relations.

Professor Kenny received his award for his contribution and success in supporting research collaborations with France in the area of platelet adhesion and for his work into the rare congenital bleeding disorder Bernard-Soulier syndrome. As part of his research Professor Kenny has worked closely with research teams of the French National Science Research Council (CNRS) in Villefranche-sur-mer and Bordeaux.

Professor Kenny was presented with his award on 21st April 2009 at a special ceremony held in the French Embassy in Dublin which was presided over by His Excellency Mr. Yvon Roe d’Albert, French Ambassador to Ireland and attended by Mr Pierre Joannon, President d’honneur Ireland Fund of France, Christian Bazantay, Secretary General of Servier Group, and Prof. Brian Harvey, Director of Research RCSI. 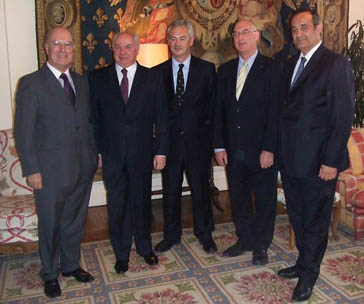