Accueil > Culture and Science > Sciences & innovation > Who we are : the Scientific and Academic Service > Our past events and archives > Events: archives > 2011 Events > 2011 Dr Jacques Servier Prize : Institut Servier Ireland Fund of (...) 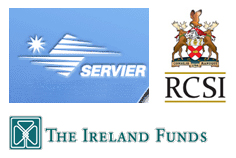 The Ireland Fund of France in conjunction with French pharmaceutical group L’ Institut Servier and the Royal College of Surgeons in Ireland (RCSI), has launched the Call for nominations for the Dr. Jacques Servier Scholarship Prize 2010 of €10,000.

The awardee will have a track record of collaboration with French researchers, have the potential to use the Dr Jacques Servier Scholar Prize to further Ireland-France Biomedical research collaboration and an international reputation in an area of research relevant to The Servier Foundation e.g. Cardiovascular, Respiratory, Endocrine disorders in particular diabetes, Neurodegeneration and Molecular Medicine.

Named after Dr Jacques Servier, the founding President of the Servier Research Group, this scholarship aims to promote and encourage scientific exchange between the medical community, health care industry, universities and research organisations particularly in the field of therapeutic research. It also represents another initiative in furtherance of the Ireland Fund of France’s mission to enhance Franco-Irish relations.

Nomination Procedure for the Prize.

Nominations must be accompanied by a detailed CV of the nominee and a letter of recommendation from the sponsor outlining the case for the award to their nominee. Sponsors may be full-time members of staff in Higher Institutions, Learned Societies or Hospitals in Ireland or abroad. There is no specific form for nominations. Selection of the Awardee will be made by a panel of experts from the Servier Foundation and RCSI. The Award will be made solely on criteria of research excellence and relevance to the General Conditions of the Prize. The Award will be presented by Her Excellency Mme Emmanuelle d’Achon, the French Ambassador to Ireland.

Anonymous and self-nominations are excluded.

The Royal College of Surgeons in Ireland

For over two hundred years RCSI has played a major role in medical education and training in Ireland. Founded in 1784 to train surgeons, a medical school was later established in 1886. Today RCSI has schools of Pharmacy, Physiotherapy, Nursing and healthcare management. In addition to Undergraduate education RCSI delivers postgraduate training and education through its Faculties of Radiology, Dentistry, Sports & Exercise Medicine and the school of Postgraduate Studies. The RCSI Research Institute promotes translational research between its laboratories and teaching hospitals throughout Ireland, the Middle East and Asia.

L’Institut Servier perpetuates the values of the Servier Research Group. These values, defined by its founder Dr Jacques Servier, are expressed in the ever-constant desire to promote research and medical knowledge in order to contribute to medical progress and therefore improve patient well-being. As a means to this end, L’Institut Servier engages and promotes scientific exchange between the medical community, the health care industry, universities and research organizations. The vocation of L’Institut Servier does not involve the promotion of Servier products, including those in research or development phases.