Home > Culture and Science > Sciences & innovation > Who we are : the Scientific and Academic Service > Our past events and archives > Events: archives > 2011 Events > 2011 Science Week in Dublin

The Science Week, scheduled between the 13th and the 20th of November, was an opportunity for the scientific department of the Embassy of France in Ireland to bring in numerous experts from France and raise interest to diverse audiences. 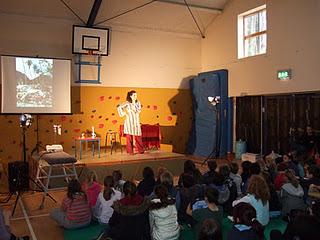 The scientific department of the Embassy of France in Ireland invited six members of the French scientific association "Les Atomes Crochus" in Dublin: they did different activities related to science, from November 14 to 17, at the French School of Ireland (LFI) and Newpark Comprehensive School. The association " Les Atomes Crochus " dedicated to popular science is chaired by the RE Eastes, a professor at the prestigious Ecole Normale Supérieure.

Thanks to financial support from the “Institut Français”, 14 activities were realized with pupils from pre-school to sixth year. The themes dealt with varied topics: protection of the environment, awareness of science, food but also poetry (Haiku workshop). All these actions will be included in a blog in four languages (English, French, Spanish and German) by students and teachers, which is accessible from the LFI website.

To conclude this range of educational activities, a show entitled "Effervesciences" was held on Thursday evening for about 70 parents who were delighted to discover the science behind the most unexpected questions. Mr. Michel Parmentier, Inspector of the French national agency for education abroad (AEFE) based in London, and Ms. Nicole Moreau, current French President of IUPAC (the International Union of Pure and Applied Chemistry), both introduced this one man show. 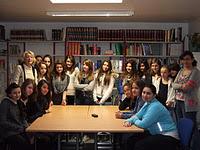 Along with these actions the LFI held a series of four conferences in partnership with the WIT ("Women in science and technology") to illustrate the success of female scientists who have achieved recognition at the highest international level, either in their scientific discipline (three researchers from Ireland, Germany) or in management (Nicole Moreau). These lectures were shot by the association WIT.