Accueil > Culture and Science > Sciences & innovation > Who we are : the Scientific and Academic Service > Our past events and archives > Events: archives > 2011 Events > 2011 – Servier Scholarship for Medical Research Awarded to Professor (...)

Professor Geraldine McCarthy, Consultant in Rheumatology, Mater Misericordiae University Hospital, Clinical Professor of Medicine, University College Dublin and Honorary Associate Professor Molecular and Cellular Therapeutics, RCSI was awarded the Dr. Jacques Servier Scholarship by the Institut Servier in conjunction with the Ireland Fund of France and the Royal College of Surgeons in Ireland (RCSI) at a special reception in the French Embassy in Dublin.

The Dr Jacques Servier Scholarship is awarded to a researcher in Ireland who has collaborated with French researchers to advance Ireland – France Biomedical research collaboration. It promotes scientific exchange between the medical community, healthcare industry, universities and research organisations particularly in the field of therapeutic research.

Professor McCarthy received the award in recognition of her research on the biological effects of crystals in human disease. Crystals found in the human body are important causes of human disease such as gout, osteoarthritis and atherosclerosis, however their formation, breakdown and actions are poorly understood. Professor McCarthy has collaborated with Professor Frederic Liote, Professor of Rheumatology, Paris Diderot University and Hôpital Lariboisière, France to advance the understanding of the mechanisms of inflammation and tissue reaction to crystals as well as their role in causing osteoarthritis and aggravating cardiovascular disease. Their research has also focused on techniques to identify crystals, particularly in the joint, with the ultimate aim of their research focusing on establishing new therapeutic approaches to crystal induced diseases.

Professor McCarthy was presented with her award on 20th April 2011 at a special ceremony held in the French Embassy in Dublin which was presided over by Her Excellency Mrs Emmanuelle d’Achon, French Ambassador to Ireland and attended by Mr. Pierre Joannon, President d’honneur Ireland Fund of France, Dr Lucy Vincent, General Director of External Affairs for the Servier Group, Dr Terry McWade, Deputy CEO, RCSI. 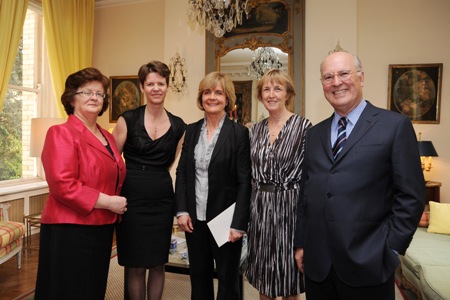