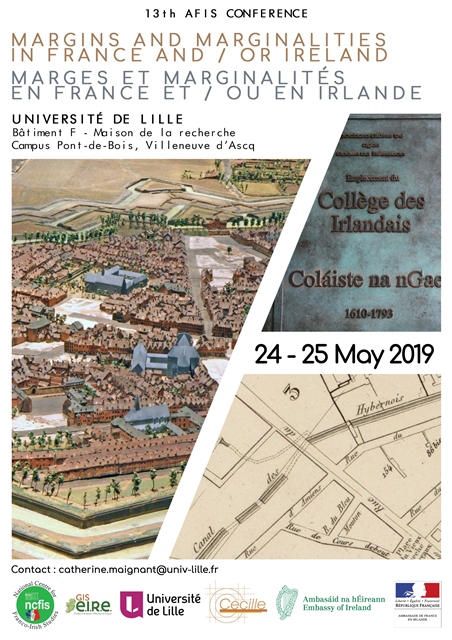 Theme: Margins and Marginalities in France and/or Ireland

French and Irish societies have been characterised in recent times by major upheavals wrought by the threat of terrorism, the collapse of economic and social structures, mass migration, the diminished role of organised religion, the ghettoization of minorities, increased homelessness and a general distrust of institutions. As a result of all these changes, the margins are now beginning to attract more and more people who find themselves placed in disadvantaged circumstances through political upheaval, and/or economic or cultural necessity. The margins and the condition of marginality have sometimes been a source of inspiration for artists, musicians, writers, mystics and even those engaged in culinary activity. Occasionally, distancing oneself from what is perceived to be a ‘desirable’ or ‘accepted’ mode of existence can help one to see things more clearly. However, clear thinking runs the risk of discommoding the ruling classes who have a vested interest in keeping things as they are. The tension between the centre and peripheries and the interaction between them fuel the dynamics of change. But the world is racked by instability and uncertainty about the future, as climate change and political disquiet dominate international debates, but without any resolutions being implemented. This conference seeks to address the contribution of the margins to reflections on the present situation and to the elaboration of the necessary transformations that may eventually emerge from the current confusion, an increasingly relevant topic for France and Ireland.

Conference : "Margins and Marginalities in France and/or Ireland” Dates : 24-25 May 2019 Location : Université de Lille Website: https://afis-lille-2019.univ-lille.fr Organised by the Association of Franco-Irish Studies, GIS e.i.r.e with the support of the Embassy of Ireland in France and the Embassy of France in Ireland