30th April/ Conference "The Irish to the Rescue" [fr]

Why did a group of Irish people and a French woman get involved in the liberation of the Polish Princess Maria Clementina Sobieska in 1719? A conference to explore the context and the reasons of this dramatic venture. 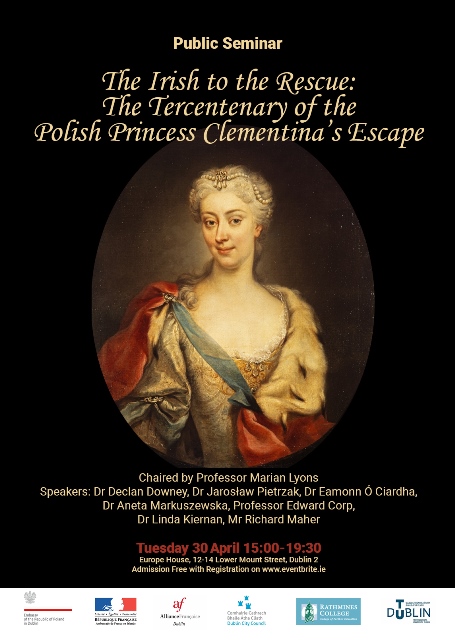 The Irish to the Rescue: the Tercentenary of the Polish Princess Clementina’s Escape
Conference poster

This seminar is organised on the occasion of the tercentenary of the rescue of the Polish Princess Maria Clementina Sobieska from captivity in Innsbruck in April 1719. The rescue itself will be retold on the 30 April 2019 and complemented by other perspectives offered by five historians. The seminar will commence with an opening address by Professor Marian Lyons (Maynooth University) to be followed by papers from Dr Declan Downey (University College Dublin), Dr Eamonn Ó Ciardha (University of Ulster), Dr Jarosław Pietrzak (University of Poznań), Dr Aneta Markuszewska (University of Warsaw), Professor Edward Corp (University of Toulouse), Ms Estelle Gittins (Trinity College Dublin), Richard Maher (Rathmines College,Technological University of Dublin). The conference will be closed with an apéritif and a 18th century musical interlude by harpist Ms Jennifer Leahy. This event is sponsored by the Embassy of the Republic of Poland in Dublin, theEmbassy of France in Ireland, the Alliance Francaise Dublin, Rathmines College of Further Education, Dublin City Counciland the Technological University of Dublin.

Polish Princess Maria Clementina Sobieska was bethroted to James Stuart III. King George I of Great Britain was opposed to the marriage because he feared that the union might produce heirs to James Francis Edward’s claim to his thrones. He got Princess Clementina arrested in 1718, while she was on the road from Olawa into the Italian states. She was rescued by a small group, led by Charles Wogan from Kildare who had entered into the service of James Stuart III by the early 1700s. The group was composed of three other Irishmen and one Irishwoman (Lady Misset - three months’ pregnant) and a young female French attendant (Jeanetton). The Princess was then escorted to Rome where she eventually married James Stuart III on 1st September 1719.