Who are the inhabitants of the Antarctic? Marc Eléaume, from the Museum National d’Histoire Naturelle, and Louise Allcock, from NUI Galway, have identified some of them. Marc explained how.

"In 2015, Louise Allcock and I were laureates of a Ulysses scheme. We had started working together in 2007-2008 when I had just started working in the Museum National d’Histoire Naturelle (MNHN) in Paris. I was then working on Antarctic crinoids’ family relationships and their life habits.

In 2007, within the frame of the International Polar Year, the MNHN, in partnership with the Australian Antarctic Division (ADD), the University of Liège (Belgium) and Japan, co-organised a multidisciplinary oceanographic campaign, known as the Collaborative East-Antarctic Marine Census (CEAMARC). This six-week campaign aimed at exploring the benthic biodiversity (living on or in the bottom of a body of water) living off the coast of Adelia (Antarctic). Amongst the benthic organisms examined, we collected a significant number of cephalopods. Louise Allcock, being a specialist of this mollusc group, was in charge of working on the magnificent collection we have constituted. To thank me for the time and energy I had invested, and in a spirit of friendship for our common friend Mark Norman – another great cephalopod specialist in the Victoria Museum (Australia) – Louise asked me to co-write an article paper with her “Cryptic speciation and the circumpolarity debate: A case study on endemic Southern Ocean octopuses using the COI barcode of life”. 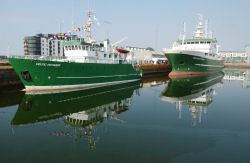 Then, more recently, in 2013, while on a deep oceanography campaign off the coasts of Ireland on board of the Celtic Explorer, Louise Allcock found important populations of peduncle crinoids. Louise remembered I was working on the taxonomy of these animals and asked me to study the collection she had collected with the help of the mechanical arm of the Remotely Operated Vehicle (ROV) Holland I, deployed from the Celtic Explorer. This ROV has also a high definition camera system which continuously films the routes followed by the ROV. Other campaigns followed, allowing the collection of other crinoids just as important, from a taxonomy point of view. All of them are in excellent condition, which allowed us to extract their DNA and amplify the molecular markers of interest. The importance of these collections is considerable because these little known animals are only present in the collections of Museums of Natural History of the world through an extremely small number of specimens. This would be due to the difficulty of exploring these very profound environments – close to the ocean abyss – constituted of rocky substrates where traditional fishing gear break or gets torn up. Actually, we have only very recently managed to produce a phylogeny based on the analysis of criteria informative enough to solve the family relationships of a big number of taxons. This new phylogeny – relies on the analysis of molecular markers – is in a big contradiction with previous consensus based on morphological criteria.

I could identify most of the specimens collected by Louise, by using two approaches, one classical, through morphology, and the other, barcoding, which is more recent and consists of analysing a DNA fragment that does not vary much within a same species but varies much more among different species. Once identified, these specimens allowed us to build an ontology of the morphotypes that can be seen in videos and thus be identified. Thanks to this approach, we could understand each species’ geographical and bathymetric distribution and the structure of populations living in canyons off the coasts of Ireland. We already know that the distribution of some of the species indexed, is strongly bound to depth and that the structure of the size of the populations of some species suggests they are very dynamic populations which are far from being extinct. Benthic organisms could constitute a new source of active molecules. A group of Irish scientists is actually already looking into these new molecules that could be applied in pharmacology or industry. This is hardly new as we already know that Gymnocrinus richeri, a crinoid living in tropical areas, produces an active molecule which fights dengue fever, a disease of viral origin. It is very possible that other crinoids – including those living in the Northeast Atlantic – have as well anti-pathogenic characteristics. This research aims at improving the life of our species by impacting on its pathogens. The research activities carried by Louise and I, aim at describing unknown or not very well known ecosystems and at understanding the way they function, their stories. Understanding this will allow us to better grasp the urgency for protecting these environments which seem very far away, unreachable and in some cases, inert. We are now going to try, in the foreseeable future, to generalise and modelise the knowledge of benthic habitats which we learnt about during our Celtic Explorer’s campaigns to all Northeast Atlantic deep canyons, from Spain to Iceland." Marc Eléaume