On Tuesday 28th May at the Residence de France, two classes were given an award for winning the "Dis-moi dix mots" competition, which was organized this year by the Association of Members of the Ordre des Palmes Académiques (AMOPA). This annual competition aims to young French learners at school. Awards, a medal, a song... and even a sunbeam had been invited on that occasion !

HE the Ambassador had chosen to host this event, starring participants to various initiatives, in the lush gardens of the Résidence de France. The first heroes of the day were certainly the young pupils from the Scoil Mhuire of Strokestown (Co. Roscommon) who succeeded in winning the jury’s support thanks to the demanding training and preparation of their excellent French teacher Anne Brudell.

For the third year the French AMOPA in Ireland set up its competition to foster dynamism, innovation and culture in the teaching of French among Irish school classes. This time, the challenge followed the French Ministry of Culture’s “Dis-moi dix mots” initiative: the candidates were to compose a song including a set of 10 mandatory words, and to make a video clip of their artwork, and of course in French s’il vous plaît. An impressive number of 137 school-boys and girls stamming from various Irish schools had accepted the challenge this year.

This year’s witty champions owed their success to a remake of the song “On écrit sur les murs” (“We write on the walls”), which Kids United made famous with their 2015 tube. This perfectly well-baked remake offered tasty new verbal ingredients, such as “phylactères” or “logogrammes”, crucial for winning the trial. Our forty fortunate winners of the day, who were almost all present on Tuesday evening, even agreed to perform their new tube live. 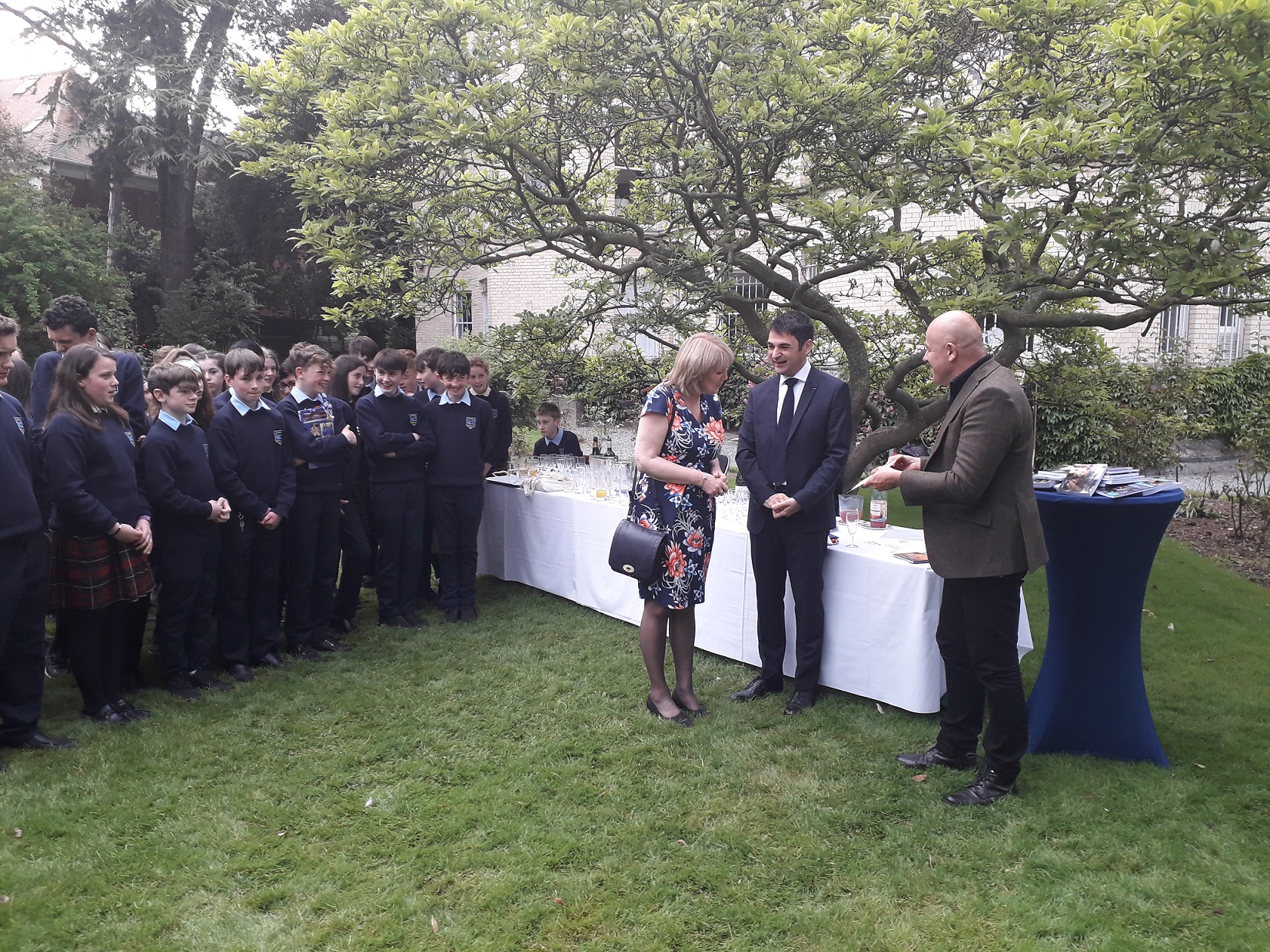 The singer Dominique A (on the right) gives the winner award to Mrs Anne Brudell for her pupils (on the left) in presence of M. Loïc Guyon (on the centre)

Their rivals proved that they had nothing to be ashamed of, by winning the second and third prizes. The Scoil Mhuire definitely hit the jackpot for this edition, as another class of Mrs Anne Brudell won the second prize for “La Seine”, which was a tribute to Vanessa Paradis and the singer M. Finally, the third prize went to a totally new brand song “Je veux apprendre” (“I want to learn”) composed by Mrs Finola McEvoy and her pupils from the Loreto College, Cavan (co. Cavan). With such a title, there is a high probability for this tube to become viral, don’t you think? 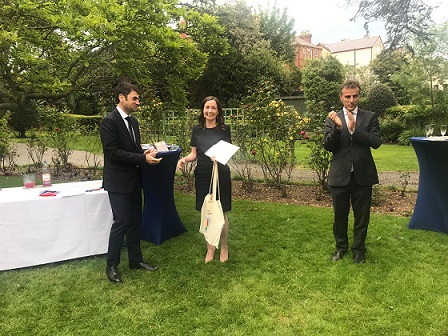 Mrs Finola McEvoy received the third prize from Mr Loïc Guyon, in the presence of HE Stéphane Crouzat

Having received the prizes in the presence of the singer Dominique A, who offered numerous discs and copies of his latest book as sponsor of this 2019 edition, the congratulations turned to an older – but not less young we shall say – audience. It was time to let Mr James Hanrahan, President of the Association for French and French-Speaking Studies in Ireland (ADEFFI) discern a postgraduate bursary sponsored by the AMOPA in Ireland. Each year indeed, the ADEFFI teams up with the AMOPA in Ireland to promote French culture among youths with a special grant aimed at one distinguished postgraduate research project. This year’s winner was the UCD postgraduate student Emma Dunne, who is currently working on 18th century Swiss author Isabelle de Charrière. 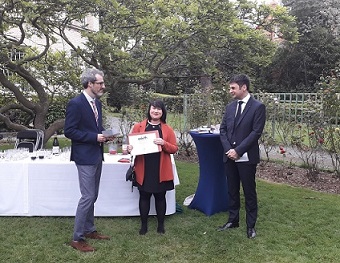 Mrs Emma Dunne received the ADEFFI from its President M. James Hanrahan (on the left)

HE the Ambassador also took the opportunity to congratulate the AMOPA in Ireland, and its President Loïc Guyon, accompanied by Grace Neville, VP, and Brigitte le Juez, treasurer in particular. He thus thanked the three year-old association for its various activities to support the French cultural and linguistic offer inside the island, and strongly encouraged the non-members attendees to joint it.

There is no such ending than an ending with a medal. This one came in a generous and unforeseen way from the hands of Mrs Dorothée Soret, President of the Section AMOPA Paris Ouest (the Association’s section in western Paris) who was present with a few of her colleagues on this evening. As her Association will be setting up a new partnership with the AMOPA in Ireland in the upcoming years, she took the opportunity to thank HE the Ambassador for his support by giving him the Medal of the AMOPA. This prestigious prize, as she explained to the young pupils, pays tribute to supporters of the Association’s missions…as well as to Heraclites, whose hopeful motto is written on the Medal’s tail : “The sun is new every day.” 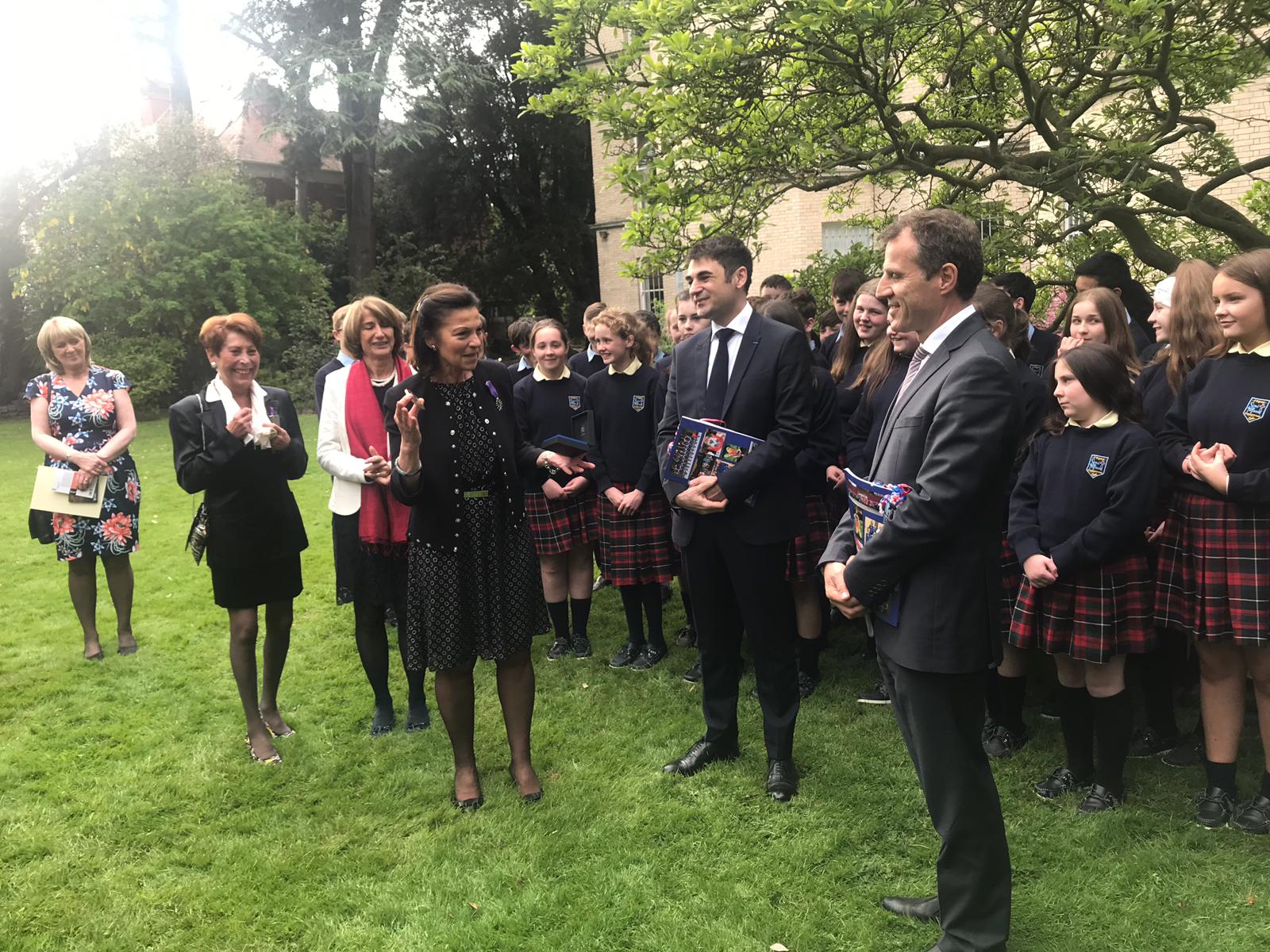