Collecting as many Deep Sky Objects as possible in one night? That was the idea of the Messier Marathon organised in Ballinskelligs, Co. Kerry, where Dr. Matthieu Husson (Paris Obs.) was invited as a speaker.

Dr. Matthieu Husson, researcher working at the Paris Observatory, was invited to the town of Ballinskelligs, Co. Kerry, to take part to the first edition of the Kerry Dark Sky Messier Marathon, on the 24th and 25th March, with the support of the Embassy of France in Ireland within the frame of the Month of la Francophonie in Ireland.

Charles Messier, comet hunter Charles Messier, French astronomer of the 18th century, was a comet hunter. While observing the sky trying to find comets, he found objects that looked like comets but did not move and had a diffuse appearance. In order not to confuse comets with these types of diffuse objects, he decided to list these objects, leading to his extensive Messier Catalog, with 110 objects.

The Messier Marathon The Messier Marathon was created in the 1960-1970s in Spain and in the United States. The idea is for amateur astronomers of the Northern hemisphere to collect as many Messier objects as possible in one night. These marathons are organised during close to the equinoxe, during a new moon night, to avoid having a too bright moon. Ballinskelligs, Co. Kerry, was hosting a Messier Marathon for the first time.

A dark sky reserve For a weekend, Ballinskelligs was caught in the Marathon fever, with sky observation sessions organised on the beach, in the evenings and early mornings. The Blackrock Castle Observatory had installed a planetarium in the city hall, some newpapers covered the event. Lectures for the general public were organised. Steve Lynott, one of the organisers, had invited Dr. Matthieu Husson to speak about Charles Messier and his work as well as two other speakers, professor John O’Halloran (University College Cork & John Flannery Irish Astronomical Society) who talked about the importance the Messier Catalogue had in astronomy and Mr. Greg Smye-Rumsby (Astronomy Now & Greenwich Observatory) asking the question of life on Mars. Ballinskelligs is part of the Kerry International Dark-Sky Reserve, being a region with limited light pollution. Local strategy is to develop the region around this theme, to increase awareness of the general public to astronomy and the importance of preserving the quality of the sky. 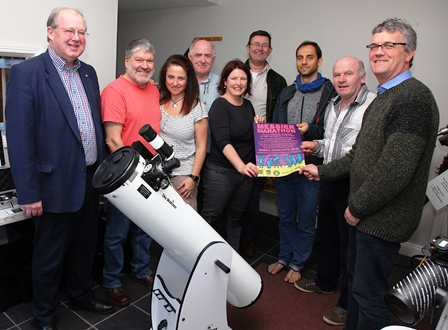 Many thanks to Dr. Matthieu Husson for his participation to the Messier Marathon and his remarks.

About the comet hunters, website of the Paris Observatory

Month of la Francophonie in Ireland.

Article of the regional edition of the Independent