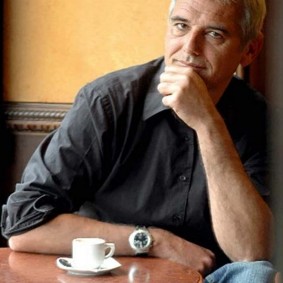 The French Embassy in Ireland and the Jameson Dublin International Film Festival are delighted to announce that acclaimed French director Laurent Cantet will receive a Volta, the Festival’s Tribute Award, tomorrow, Friday 27 March 2015.

Ambassador of France to Ireland, M. Jean-Pierre Thébault will award the prize to Mr. Cantet during a reception organised on the occasion at the French Residence in Ballsbridge, Dublin 4.

Laurent Cantet is one of French cinema’s refined filmmakers, a standard bearer for the national cinematic genre with his Palme d’Or winning and Academy Award nominated The Class and César awards for Ressources humaines, 7 Days in Havana and Foxfire. Laurent Cantet will also be in Dublin to attend the screening of his latest film Return to Ithaca – Retour à Itaque on Friday 27th March at 9.15 at the Screen Cinema where he will meet the public for a Q&A session. {{}} {{}} {{}}

The VoltaEach year the Jameson Dublin International Film Festival presents The Volta Awards to outstanding individuals who have made significant contributions to the world of film The annual Volta Awards are named after Ireland’s first dedicated cinema, the Volta Picture Theatre on Mary Street in Dublin, which opened on 20 December 1909. The cinema was run by an enterprising young novelist named James Joyce.