37 km of tracks (49 soon with the future LUAS Cross City extension!), 30 million passengers per year (80,000 per day!), some impressive figures for the first tram transport network in Ireland.

Gaelic term for “speed”, the LUAS has been operated by Transdev, one of the main French public transport company since 2005. A longevity benefitting the company which recently won the call for tenders for the management of the LUAS for the next 5 years. Zoom on 10 years of success for a little train full of ideas!

From La Rochelle to Dublin, a Franco-Irish success story

Born from a report from the Dublin Transportation Initiative which sought to revive the former Dublin tram network, the LUAS was launched in 2004. A true symbol of modern transportation, laureate of the 2014 Business Awards of the France-Ireland Chamber of Commerce, the tram of Dublin is, above all, a great Franco-Irish success.

Starting from the Alstom plants in La Rochelle where its cars are manufactured, the tramway network is also operated by the French public transportation company Transdev since 2004. An exchange of skills epitomizing the industrial friendship between France and Ireland. A true French partnership of Transdev, Alstom and Veolia delivering for the Irish public. 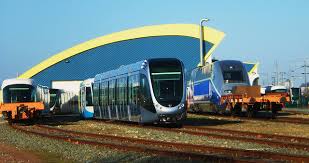 The tram just out of the plant in La Rochelle

But beyond technical questions, the LUAS is also the story of a Franco-Irish team who work, since the beginning, from the Red Cow control centre to the very end of the furthest track for the safety and well-being of the daily users of Ireland’s only light rail network.

And there are many users! 80,000 people per day, 30 million passengers per year in the heart of one of Europe’s most vibrant city! The LUAS is above all a challenging enterprise, successfully carried out on a daily basis since 2004. 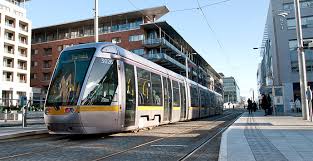 the LUAS, a Franco-Irish success story

Two lines complete the intricate transportation network already existing within the city and projects to see its extension are under way with the LUAS Cross City project.

An environmental message at the heart of Dublin

The LUAS is also Dublin’s strongest environmental asset. Beyond the human and technological challenge, it is an ecological track growing within the city. 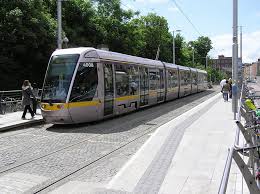 The LUAS, a green line within Dublin

It is a transport option that is friendly to the environment; your journey starts with real time passenger information, taking you to a park and ride should you wish, or you can cycle and ride. Transdev have worked hard to reduce the trams electrical, gas and water consumption. Waste management has also been greatly improved and the overall advantage of the environmental impact of tram travel is communicated to the customer daily including an on line emissions calculator to check your tram travel verses car.