Anne Goarzin, French historian, will be speaking at "The Other 1916 Conference", on June 3rd 2016 in Dun Laoghaire.

The Other 1916, a conference that aims at exploring counter-narratives to the established discourses of 1916. While the events of the 1916 Easter Rebellion occupy a central position in an understanding of Irish identity and the nation state, this dominant discourse often excludes alternative narratives in the context of a broader European and international modernity.

The conference seeks to re-consider 1916 through the lens of the intellectual and artistic material produced within that year. Guest speakers include Professor Declan Kiberd (University of Notre Dame) and Professor Anne Goarzin (Université Rennes 2). The conference is co-organised by Caitriona Kirby, Jenny McDonnell, and Maria Parsons, and supported by Dun Laoghaire-Rathdown County Council, under the auspices of their ‘Ireland 2016’ initiative. The full programme is available here 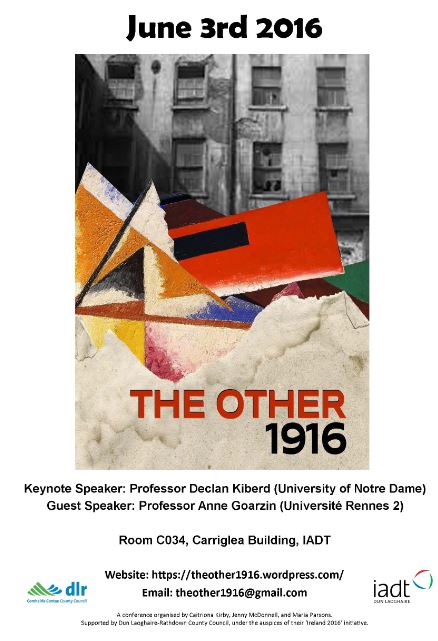