Last month we celebrated a special anniversary. A famous Frenchman came to Ireland 50 years ago for six weeks, after resigning from office. He was longing for a quiet retreat to start his final memoirs, and was in search of his Irish roots. His great-grandmother was a Mac Cartan, his ancestor was one of those Wild Geese who fought alongside French troops in the 18th century. His grandmother had written a biography of Daniel O’Connell which he had read as a child. His name was Général de Gaulle. On 18th June 1969, the anniversary of his famous Appeal of 18 June 1940, he had lunch in this residence. Last month a delegation of nearly 30 French senators led by president of the Senate Gérard Larcher came to Ireland to follow in his footsteps, from Kerry to Conemara to Dublin. If you go to Sneem, you can now see an exhibition of photographs celebrating this historic visit 50 years ago.

Two days ago, with the Lord Mayor of Dublin and the Tanaiste, we laid wreaths at the France-Ireland memorial monument at Glasnevin, honoring the memory of the Irish people who fought alongside France and died in the wars of 1870, World War I and World War II. We honored in particular an Irishman buried at Glasnevin, James Fitzgerald Lombard, who was involved in the raising of the Franco-Irish Ambulance, a group of volunteer medics formed to assist the French Army during the Franco-Prussian War. Over 250 men travelled to France as part of the unit, which was financed, equipped and sent by the committee chaired by Lombard. He was awarded the Légion d’honneur for his work in helping raise the Ambulance. We also honored the memory of a man who should have been with us today, Canon Robert Mardsen, an Irish veteran of WWII, récipient of the Légion d’honneur and who died earlier this week at age 96.

Such are the bonds that link our two countries. We also remember Général Humbert who tried unsuccessfully to free the Irish from the British in 1798. We remember Edward Hollywood, also buried and honored at Glasnevin, and Thomas Francis Meagher who both brought back the tricolour from France in 1848. We can find connections right down to the events of 14th July 1789, where two Irishmen participated in the decisive assault of the Bastille, Joseph Cavanagh and James Bartholomew Blackwell. And one of the 7 prisoners freed from the Bastille prison that day was an Irishman by the name of James Francis Xavier Whyte. He was admittedly inside the Bastille at the behest of his own family, having become unsufferable after a serious mental breakdown…

But it is not just the past that binds our two countries. Since 1973 when Ireland joined the European Economic Community, we have had a common future. At last year’s Bastille Day celebration, I said that France would soon be Ireland’s closest neighbour in the EU. For reasons beyond our control, this has not yet happened. But whatever the ultimate outcome, our two countries are set to become closer than ever, bonded by the past and by our shared future.

France, along with its partners in the EU, is keenly aware of the special circumstances of Ireland in relation to Brexit. As we approach yet another deadline with all its uncertainties, we will remain steadfast in our solidarity with Ireland. Because the EU is more than economic exchanges, it’s more than a single market and a customs union. It is a common destiny, it is our shared and thus enhanced sovereignty.

Ireland and France share a common vision, at the very heart of Europe, and common values. Among them, the protection of the environnement and climate action. France will inshrine into law its target to achieve carbon neutrality by 2050. And Ireland has set out an ambitious climate action plan which will make it a key partner within the EU in the fight against climate change. The Irish experience of citizens’ assemblies has ellicited much interest in my country : my government, inspired by your example, has decided to set up a similar assembly to make proposals to Parliament on how to implement our commitments in the fight against climate change.

We are working on an energy project, the “celtic interconnector”, that will connect our two countries with an electric cable, 500 km underwater, by 2026. Our electricity operators have put a request for funding to the European Commission for this 1 billion euro projet, with huge political support from the Taoiseach and President Macron. The “celtic interconnector” will boost renewable energies on both sides. It will be Ireland’s physical link to the continent.

Last year marked the centenary of the end of the First World War. On that occasion the first edition of the Paris Peace Forum was held. A second edition will be organised next November for what is destined to be an annual event, with the participation of Heads of State and Government, international organizations, NGOs, intellectuals, all those who want to think, take action, drive modern multilateralism, build peace. Ireland will have much to offer in the discussions with its experience in conflict resolution and the ardent belief - that France shares - in multilateralism.

Before I give the floor to the musicians, I would like to encourage you to visit some of our stands : the French Tech Stand with some representatives of our vibrant French Tech Community ; the Alliance française stand, for those who need to brush up on their French and get immersed in French culture.

And I would like to thank warmly those who made this event possible :

Ba mhaith liom buíochas chroíúil a ghabháil le hudaráis na hÉireann go háirithe na Gardaí agus fórsaí cosanta na hÉireann, do na pubaill. I would also like to convey our warm thanks to the Irish Authorities : in particular the Guardi and the Irish Defence Forces for the tents ;

Our thanks go to all our sponsors, some 17 French and Irish companies without whom an event on this scale would not have been possible ;

and our thanks to the artists : the Letchikos band, and the Mellow Tonics choir. 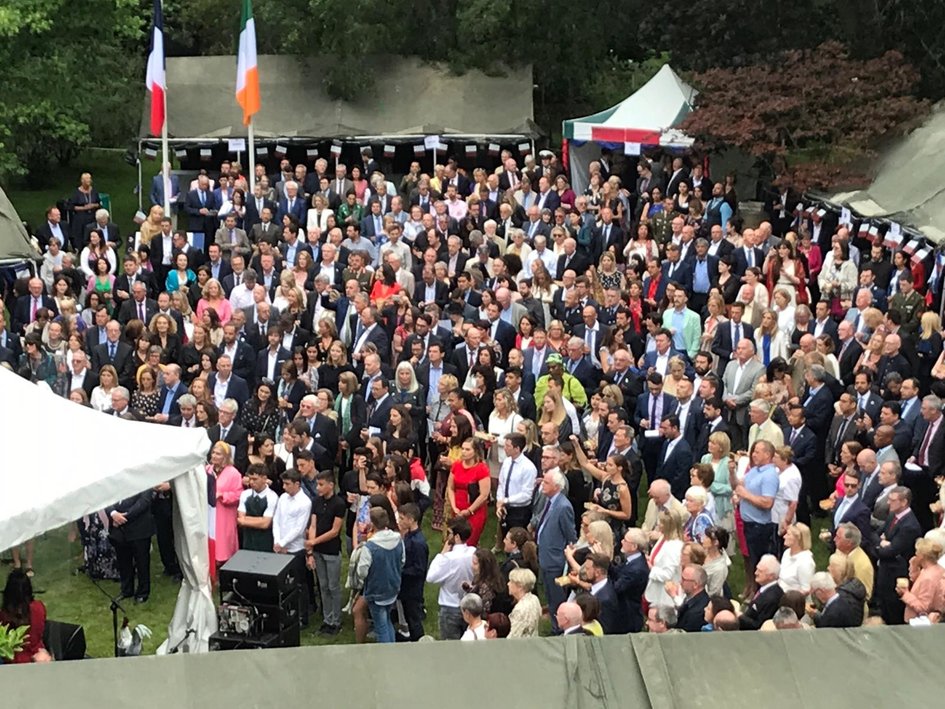