As we approach France’s National Day Bastille Day, we are gathered today in front of the France-Ireland monument for this remembrance ceremony commemorating the Irish heroes who fought in France during three wars : the 1870 Franco-Prussian war, the First and the Second World Wars.

The monument before us was inaugurated in 2016, one century after the battle of the Somme, where thousands of Irish soldiers died.

Glasnevin is the resting place of many Irish heroes whose bravery on the battlefield was recognized by France and who are thus recipients of the Légion d’Honneur.

With Glasnevin Trust we have embarked on a project of honoring - and sometimes rediscovering - these heroes. Every year we aim to walk through the alleys of this magnificient cemetery to unveil new plaques in their honor, recognizing the distinction they received from the French Government.

Last year we unveiled a plaque at the grave of Michael McWhite, who joined the French Foreign Legion during WWI and fought in France, Greece and Turkey, was wounded at Gallipoli and was awarded the Croix de Guerre three times for bravery in combat, received the Légion d’Honneur and embarked on a career as a distinguished diplomat for the Irish Free state.

In a moment we will pay special tribute to another Irish hero buried at Glasnevin cemetery, James Fitzgerald Lombard. He was instrumental in the creation of the Irish Ambulance Corps during the 1870 Franco-Prussian war, sending over 250 men to France, and thus saving countless lives by caring for the wounded. After the war, he was awarded with the Officier de la Légion d’Honneur. We are honored that members of his family could join us today.

I would also like to honor today the memory of Irish Veteran Robert Mardsen, who received the Légion d’Honneur from the hands of my predecessor in 2016, and who died yesterday at the age of 96. Canon Robert William Marsden trained with the Royal Inniskilling Fusiliers. He joined the infantry voluntarily and went on active service in Normandy in 1944. As part of the Ist battalion, Hampshire Regiment, he joined the 50th Northumbrian Division with which he took part in the liberation of Brussels. He finished the war near the Kiel Canal in Schleswig-Holstein. Upon his return, Robert Marsden was ordained Church of Ireland Deacon for St James’ Parish, Dublin in 1950 and priest in 1951. He was made Canon and Precentor of Clogher Cathedral. May he rest in peace.

These heroes have now passed to posterity, and their legacy endures. These heroes embody the true spirit of Franco-Irish friendship, a friendship forged in tears and blood, but also nurtured in peace and hope, bonded as we are in a common future.

Maréchal Foch had powerful words for the Irish, words that are written on this monument : “Some of the flower of Irish chivalry rests in the cemeteries that have been reserved in France, and the French people will always have these reminders of the debt that France owes to Irish valour. We shall always see that the graves of these heroes from across the sea are lovingly tended, and we shall try to ensure that the generations that come after us shall never forget the heroic dead of Ireland.”

With Glasnevin Trust and thanks to your presence here today, we humbly do our part in this effort to never forget. 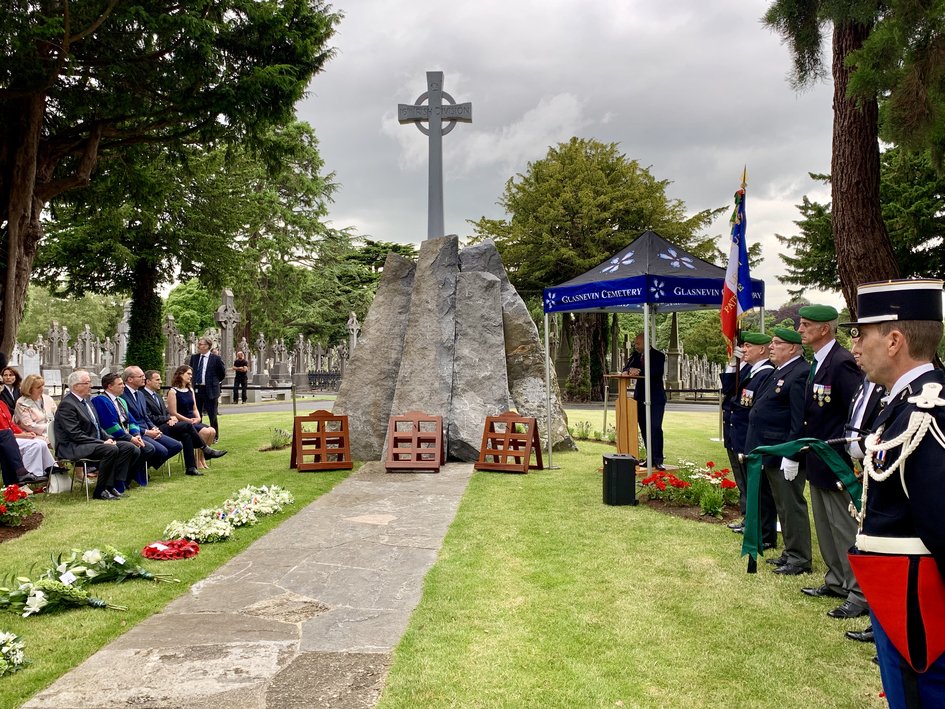