Dr. Gordon Armstrong (University of Limerick) and Prof. John Ringwood (Maynooth University) were both presented with the insignias of the Palmes Académiques by H.E. Stéphane Crouzat, Ambassador to France in Ireland.

L’Ordre des Palmes Académiques is an order of the French Republic rewarding figures who make an outstanding contribution to enriching our heritage. 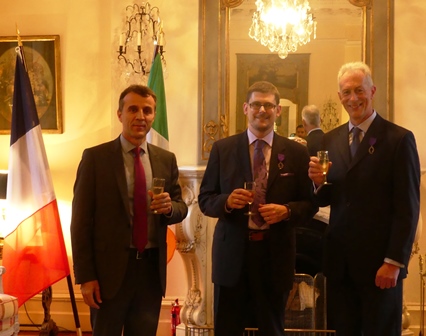 "Dear Gordon, After obtaining your PhD in material sciences in Limerick in 2002, you started your career as a young researcher in the University of Limerick and Trinity College Dublin and then back to Limerick where you successively worked in the Stokes Institute and the Material Sciences & Surfaces Institute. You have always been involved in the training of the next generation of researchers and the development of international collaborations, especially with France. You obtained a Ulysses grant with professor Armelle Vardelle from the University of Limoges, which led to win the ANORAA Award (the French national association of reserve officers of the Air Force). You have since successfully set up a double degree and a cotutelle between your two universities. Member of the Royal Society of Chemistry and of the Society of Chemical Industry, you have organised 8 scientific conferences and chief editor of Polymer International. 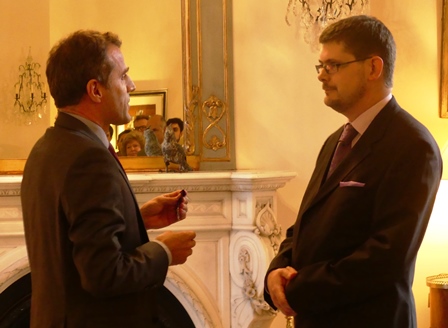 Dear John, After studying in DIT, you graduated from Strathclyde University with a PhD in 1985 in Scotland. You lectured at the School of Electronic Engineering in Dublin City University before being Professor and Head of the Department of Electronic Engineering in Maynooth University in 2005. Your career led you overseas to New Zealand where you were a visiting research fellow and a visiting senior lecturer. You are a Fellow of Engineers Ireland and a Chartered Engineer. You served as Dean of the Engineering at Maynooth University and are currently the Director of its Centre for Ocean Energy Research. Your research focusses on the development and application of modelling and control systems techniques. You published 252 articles in scientific publications, have established many contracts with numerous companies and secured quite a number of European fundings. Your commitment and dedication to the training of researchers has extended to France, as many French PhD and postdoctoral students and interns have benefited from your knowledge and mentoring. You are recognised by your peers as one of the best on the thematic of marine energies, and have been a key pillar of French-Irish scientific and academic cooperation at its highest level. 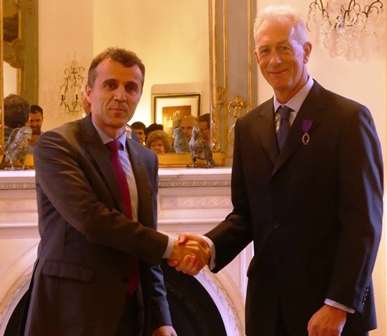 Cher John, tonight, for your incredible and enduring contribution to the bond that unites our two countries, it is a great honour for me to bestow on you this insignia. Au nom du Gouvernement de la République, nous vous faisons Chevalier dans l’Ordre des Palmes Académiques. "