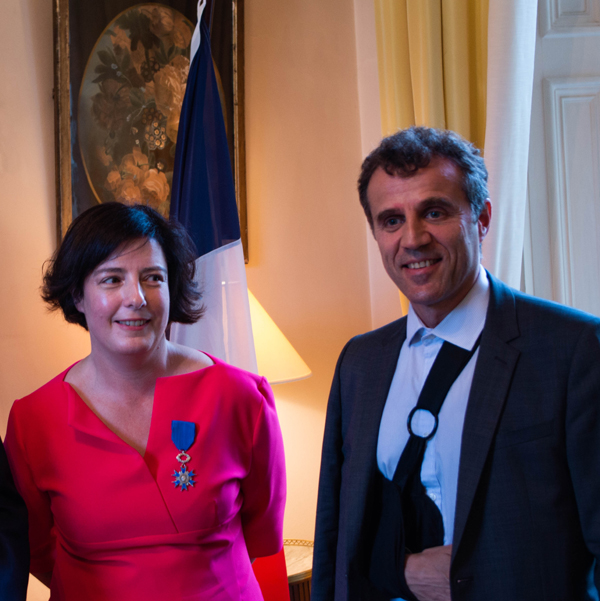 Dublin International Film Festival Director, Ms Grainne Humphreys, has been presented with the Ordre National du Mérite by France’s Ambassador to Ireland, Mr Stéphane Crouzat on Wednesday 13th June. The honour is being bestowed on Ms Humphreys in recognition of her continuous work for the promotion of France-Ireland cultural relations.

The National Order of Merit is a French order of merit with membership awarded by the President of the French Republic. The order was established in 1963 to create an award for French citizens as well as foreign nationals for distinguished civil or military achievements. A maximum of 5,000 individuals can receive the insignia each year.

Ms. Humphreys has been awarded the titre of Chevalier de l’Ordre National du Mérite at a ceremony at the French Résidence on Wednesday 13 June 2018.

Speaking at the ceremony, Ms. Humphreys said: “I am truly delighted to accept this award from Ambassador Crouzat. It is an unexpected honour to share this decoration with French filmmakers I revere such as René Clair and Isabelle Huppert. This decoration represents recognition from a country I have loved since I was a teenager and whose culture continues to inspire and provoke my work. From Agnès Varda and Jeanne Moreau to François Ozon - I am proud of the wonderful French guests and films I have premiered in Dublin.”

Speaking at the ceremony, the Ambassador of France Mr Crouzat said: “I am delighted to reward Ms Grainne Humphreys for her continuous commitment to promoting France-Ireland cultural relations. In her role within the Irish Cultural Centre in Paris she contributed strongly to developing the cultural relations between our two countries with a shared passion for French and Irish arts and culture. Through her career, Ms Humphreys has always showed a passion for French culture which she promoted in Ireland in her roles at the Irish Film Institute or at the Dublin International Film Festival.”