Throughout the month of July, Ballina Arts Centre, in Ballina, Co. Mayo, will host Ondes et Miroirs, an exhibition of works by the French artist Camille Lambert. 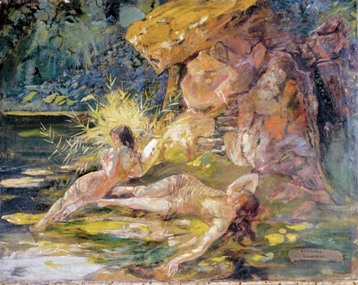 Born in 1874, Camille Lambert studied at the Academy of Brussels and at the age of 20 was asked to choose between painting and music. After a brief sojourn in Paris, he settled in Juvisy-sur-Orge in 1919. With his wife, Amanda Laermans, he bought a small hunting lodge where he built his studio. Isolated in his property of n°18, Avenue Gounod, preferring nature, solitude and tranquillity to the Parisian society life, he avoided the animation which shook the artistic milieu at the turn of the century and remained a rather classical artist.

His painting is redolent of the Post-Impressionists, with a nod also to the Symbolists. Very early, he was approached to take over the classes of the former municipal (primary) school of drawing and as soon as 1920, began giving his own classes while he also provided some classes at the Secondary School of St. Charles in Juvisy. In 1954, he offered to donate to the town his property at the 18 Avenue Gounod, under the condition that be devoted to the foundation of a municipal school of painting, where the public could attend classes.

Stricken by a brain anaemia, he gradually lost his lucidity and died September, 10th 1964. He is buried alongside his wife, dead in 1940, in the old graveyard of Juvisy.

The exhibition at Ballina Arts Centre celebrates the twinning of the Ballina with Athis-Mons/Juvosy-Sur-Orge, and is kindly supported by the Cultural Service of the Embassy of France.