As Ireland commemorates the Centenary of the 1916 Rising and the Proclamation of the Irish Republic, what are the links between Revolutionary France and Ireland? A study day is organised in the Institut d’Histoire de la Révolution Française in La Sorbonne, Paris on 27 May 2016.

As Ireland commemorates the Centenary of the 1916 Rising and the Proclamation of the Irish Republic, it is timely to interrogate anew the links between Revolutionary France and Ireland forged during the pivotal decade of the 1790s. Despite the heroic failures of the military expeditions, generations of nationalists remained inspired by this first formulation of Irish sovereignty throughout the 19th century. This re-appraisal is all the more necessary given the new research perspectives which have emerged in the three decades since the publication of Marianne Elliot’s seminal Partners in Revolution (1982) and the Bicentenaries of the French Revolution and the 1798 Rebellion. The latter, astonishingly, remained quote insular in approach and unfolded without the involvement of any French academics with specialist insights. 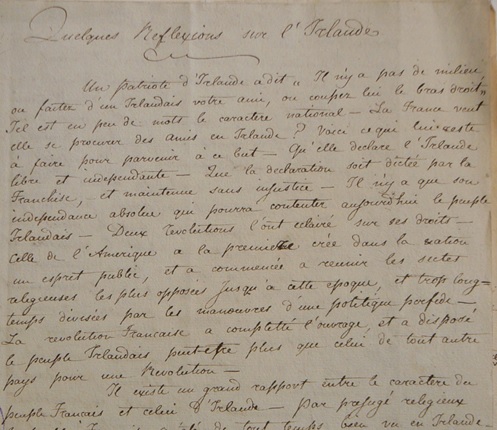 Scholarship since 1998 has been dominated by anglophone historians, while academics in France have largely ignored Ireland, with a few notable exceptions now outdated in their perspective. Looking back on the context in which historians in Ireland taught, published and engaged with public debate in the bitterly divisive context of the Troubles in Northern Ireland and their immediate aftermath, and fully recognising the moral and intellectual dilemmas they faced in not wishing to fuel paramilitary hagiographies, some Irish historians (namely those deemed ‘revisionist’) now appear harsh in their appraisal of the first republicans of the 1790s. The United Irishmen often emerged from this otherwise highly productive phase of scholarship as delusional and opportunist republicans.