Home > Culture and Science > Sciences & innovation > Who we are : the Scientific and Academic Service > Our past events and archives > Events: archives > 2015 Events > France honored at the International congress for comparative (...)

France honored at the International congress for comparative literature 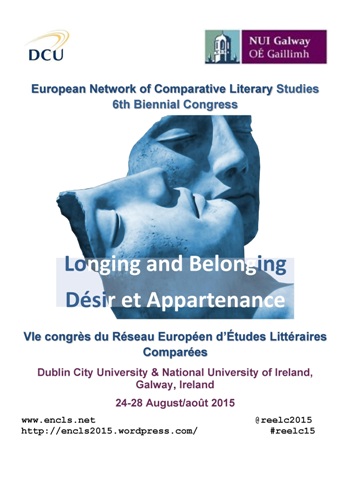 Dublin City University and NUI Galway have opened the 6th International Congress for Comparative Literary studies from 24th to 28th August 2015 on the theme of « Longing and Belonging ». More than 150 papers have been presented by Researchers from all European country. This congress is organized within the European Network for Comparative Literary Studies framework. France has been particularly honoured. Firstly because the organisation of this congress has been put in place by Brigitte Le Juez, a DCU Professor with French nationality. After the introduction of the seminar by the president of DCU, Professor Brian McCraith, Brigitte Le Juez took over the delivery of the inaugural opening ceremony.

Among the honoured guests at this congress was Bertrand Westphal, Professor of general and comparative literature from the University of Limoges, who contributed to the plenary session on the theme of « To belong to the periphery of the world » which was supported by the Embassy of France in Ireland. Most of his numerous books, have been translated into English at Palgrave-McMillan. Bertrand Westphal directs the research team « Human Space and Cultural interaction ». He is the pioneer of « geocritism », which involves one of the principal literary approaches to the representation of human space. He is the author of several other books including « Roman et Evangile » devoted to the rearrangement of episodes or of characters taken from gospels into the contemporary European novel, and « L’œil de la Méditerranée : une odyssée littéraire » which brings together a series of studies of Mediteranean places. He has just completed two years as invited professor at the University of North Carolina Charlotte (United States).