Home > Culture and Science > Arts and literature > Literature & Cultural Debates > [Francophonie and Literature] Get to know Anne Enright, selected for the (...)

[Francophonie and Literature] Get to know Anne Enright, selected for the 2018 Ambassadorial prize! [fr]

Nomianted for her novel The Green Road (L’herbe maudite), learn a bit about Annie Enright and her translator Isabelle Reinharez! 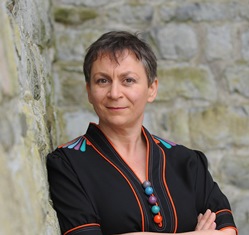 Anne Enright was born in Dublin in 1962. Educated at Trinity College Dublin (English and Philosophy), she was an early member of Rough Magic Theatre Company. She was a television producer and director for RTÉ in Dublin for six years and produced the RTÉ programme Nighthawks for four years. Her short stories have appeared in The New Yorker, The Paris Review, Granta and in most notable anthologies of Irish fiction. Her first collection, The Portable Virgin, won the Rooney Prize for Irish Literature in 1991. The collection Taking Pictures was published in 2008. Novels include The Wig My Father Wore (1995), What Are You Like? (2000, winner of the Encore Prize and shortlisted for the Whitbread Prize) and The Pleasure of Eliza Lynch (2002). A collection of essays about motherhood, Making Babies (2005), became very popular. Enright’s novel The Gathering won the 2007 Man Booker Prize. Her most recent books are the novels The Forgotten Waltz (2011) and The Green Road. In 2015, she was appointed Ireland’s first Laureate for Irish Fiction. Anne Enright lives in Bray, Co. Wicklow. The Green Road (Jonathan Cape, 2015) spans a period of twenty-five years in the lives of the Madigan family: Rosaleen and her four children, Constance, Dan, Emmet and Hanna. Set between the eponymous road in West Clare and early 1990s New York, Mali and Dublin, the novel details the changing fortunes and foibles of the different family members. Hailed on its publication as ‘virtuosic’ (Anthony Cummins in the Telegraph) and ‘so Irish it’s almost provocative’ (Belinda McKeon in The Irish Times), Enright’s Man Booker-nominated novel defies convention and cliché in its depiction of a family unable to connect.

Isabelle Reinharez has extensive experience of translating from the English language into French. She has translated two earlier novels by Anne Enright, both for Actes Sud: The Forgotten Waltz/La Valse oubliée (2012) and The Gathering/Retrouvailles (2009). Isabelle has worked on novels and poetry collections by several North American writers, including Robert Olen Butler, Louise Erdrich and Ron Rash. She has also translated many works of children’s literature into French.