Home > Culture and Science > Sciences & innovation > Who we are : the Scientific and Academic Service > Our past events and archives > Events: archives > 2013 Events > French Embassy launched Campus France Ireland

On Thursday 21 February, French Senator Françoise Laborde, President of the France-Ireland Senate Friendship Group along with French Ambassador to Ireland, Emmanuelle D’Achon officially launched Campus France Ireland. This new branch of the French public agency, Campus France, is based in Dublin and offers personalised assistance to Irish students who wish to study in France. More details are available at: http://www.irlande.campusfrance.org/en/.

Speaking at the launch, Elodie Le Rouic, Head of Campus France Office in Ireland pointed out that “French is the first foreign language learned in Ireland. France is the first foreign speaking country destination for Irish students thanks to more than 470 agreements of double degrees, Erasmus exchanges and joint PhDs. It represents 1034 Irish students per year of whom 514 are enrolled on Erasmus programmes.”

For Ambassador D’Achon: “Welcoming more Irish students to France as part of their studies will strengthen our relationship and links leading to stronger cooperation between our two countries. In the long term, jobs and enterprises will be created by these students who will become part of the European economy.”

Campus France Ireland is managed and funded by the Embassy of France in Ireland, and in France by Campus France. 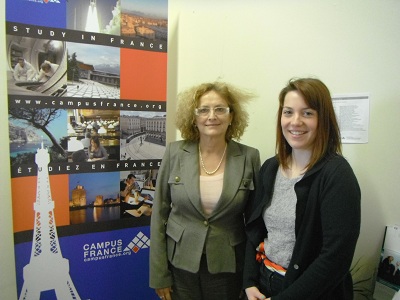