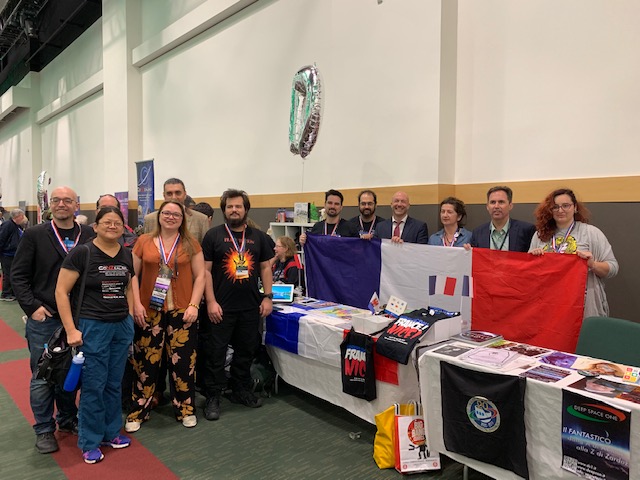 The delegation of the French Embassy with the Nice 2023 bid team and French fans and artists.

The biggest Sci-Fi meeting in the world

Dublin has hosted on August 15-19 the 77th World Science Fiction Convention (Worldcon). It’s the first time that this event – the biggest Sci-Fi meeting in the world – is held in Ireland. Many French artists, scholars, professionals and fans were part of the 5000 members that attended this year’s event in Dublin.

Throughout the five days, readers, authors, editors and other sci-fi creators from all over the world gathered in Dublin to attend conferences, author readings and signings, lectures, panel discussions, small group meetups and workshops.

The first Worldcon took place in 1939 in New York. Each convention is run by its own committee and staff of volunteers. Next year’s one will take place in Wellington, New Zealand.

The city of Nice in France is candidate to host the Worldcon in 2023. It would be the first time that this event comes to France. Many members of the Nice 2023 bid attended the Dublin convention this year in order to promote the French bid and to present to the other participants all the assets of the city of Nice.

Lionel Paradisi-Coulouma, Chargé d’affaires, and a delegation from the Embassy of France in Ireland came to show their support to Nice 2023 bid. They also met with members of the team and French authors, editors and illustrators. 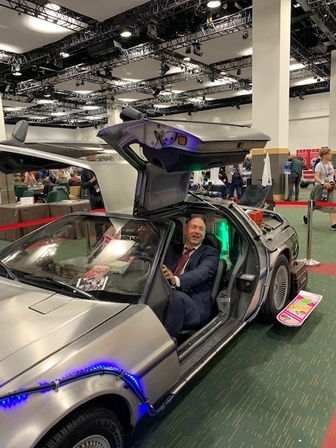 Lionel Paradisi-Coulouma in a replica of the famous DeLorean