French artists to take to the streets of Galway this July at the Galway International Arts Festival! A breathtaking programme awaits you with two street spectacle shows from Transe Express,Chariot of the Sea and Mobile Homme, along with a street art/architecture project from French artist Olivier Grossetête, The People Build. 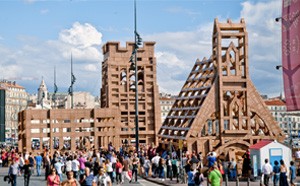 Irish Premiere Audiences are invited to take part in a spectacular architectural event devised by the French artist Olivier Grossetête. Over four days, thousands of cardboard boxes will be transformed into the building blocks of a democratically assembled building, created solely through human power and collective endeavour. 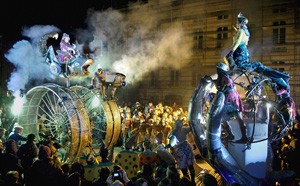 Chariot of the Sea

Irish Premiere French masters of street spectacle Transe Express has performed all over the globe from Sydney Harbour to the London Olympics. They return to Galway following the spectacular Giant Divas in 2015 with two shows Chariot of the Sea and Mobile Homme. Transe Express will delight audiences with their high–energy interactive street show Chariot of the Sea, transporting the audience to a magical world as they weave through the city streets. Fantastic and dreamlike, Chariot of the Sea is a maelstrom of percussion, atmosphere and colour.

The performance will start in Eyre Square and end at the Spanish Arch. 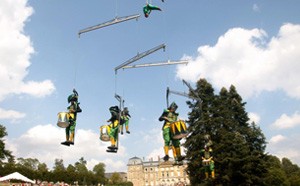 A large–scale aerial performance. A parade of drummers and percussionists meander through the city streets from the Spanish Arch to Eyre Square beating their infectious rhythms through the heart of medieval Galway. Joined by an acrobatic dancer the performers are lifted over 100 feet into the sky on a giant telescopic crane to create a breathtaking and magical giant human mobile.

The performance will start at St. Nicholas’ Church and end in Eyre Square.