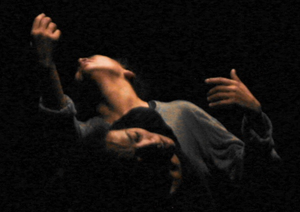 Compagnie Nacera Belaza (Lyon) will be performing this Friday 27 March 2015 at the Black Box Theatre, Galway, as part of the Galway Dance Days | Corp_Real Festival .

Compagnie Nacera Belaza is invited regularly to perform at such prestigious festivals as Festival Montpellier Danse and Festival d’Avignon. Self-taught, Nacera’s works have toured the globe. This is Irish premiere for this Algerian/French choreographer.

Le Temps Scellé was first performed at the Lyon Biennale in 2010. The movement inhabiting the bodies transports them towards an overwhelming question – who or what, on the brink of abandon, is able to resist? Up to what point is a person allowed, or capable of voluntarily disappearing? The momentary feeling of living a moment freed from its fears and physical constraints, while abandoning oneself to become the ‘whole’ is explored in the work. This piece assumes a new ceremony, creating an impressive and spellbinding performance.

Le Trait - Solos is a two-part performance choreographed and performed individually by Nacera and Dalila Belaza. The performance allows the audience to experience the emptiness that surrounds oneself, heightening the sense of loneliness. For Nacera, the starting point of a solo has not been about putting a being on stage to ‘tell’ or to ‘perform’, but rather, to offer the most radical interpretation of loneliness from oneself. It is a work that explains precisely the final act of being alone in the world.