The honour is being bestowed on Mr Keane in recognition of his work for the promotion of France-Ireland cultural relations.

The Irish Film Institute is an essential link in the dissemination of cultural cinema in Ireland and has for years collaborated with this Embassy. Ross Keane’s involvement in the IFI French Film Festival, Ireland’s leading celebration of French films, has allowed this event to develop considerably with the support of the French Embassy. This Festival has become an anticipated rendez-vous in the Irish cultural calendar. The work of the IFI in collaboration with the French Embassy in promoting French language and films to schoolchildren through the annual Schools Programme must also be noted. 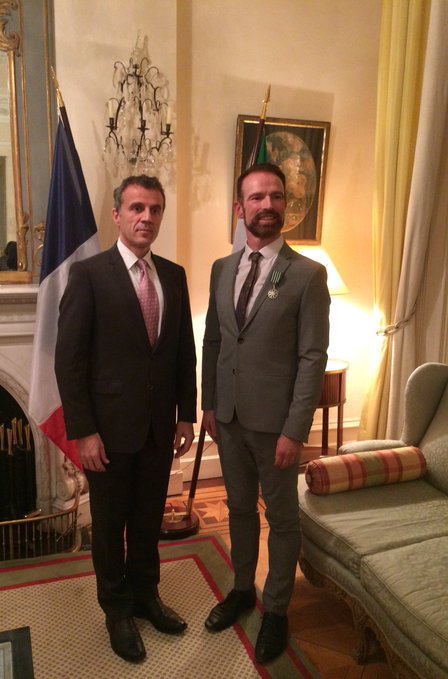 Speaking at the event, Ambassador Crouzat said “In presenting this award, France recognises Ross’s commitment to promoting French cinema in Ireland. Our two countries share a love for quality independent cinema and the collaboration between the Embassy and the IFI embodies this passion. I am delighted to reward Ross Keane with the Ordre des Arts et des Lettres”.

IFI Director Ross Keane added, ‘It’s an absolute honour to be awarded the Chevalier des Arts et des Lettres. I have had a deep connection with France for many years, both personally and professionally, which makes this recognition even more significant and special for me. I am privileged in my role as Director and CEO of the Irish Film Institute to celebrate French cinema every year through the IFI French Film Festival, which is now the largest celebration of French culture in the country.’

The Ordre des Arts et des Lettres (Order of Arts and Letters) was established in 1957 and is awarded by the French Ministry of Culture to recognize eminent artists, writers, and scholars for their efforts in promoting the awareness and enrichment of France’s cultural heritage throughout the world.

Ross Keane is being nominated as a Chevalier in the Order.