On the 12 and 13th March 2016, a two-day conference in Ferns will be exploring Wexford’s transformation, from a Gaelic kingdom to Norman landship.

A real Game of Thrones in Ferns!

Gaelic kings and Norman warlords will be the subject of a major conference to be held in Ferns on March 12th - 13th. The conference is entitled ’Gaelic Capital and Norman Stronghold - Ferns and the transformation of Ireland’. The two day symposium will explore Wexford’s transformation from Gaelic kingdom to Norman lordship.

Ferns was central to the events which took place in the 12th century and which transformed the ancient Gaelic kingdom of Leinster and changed the course of Irish history. “This was a real Game of Thrones,” according to Catherine MacPartlin, one of the organisers of the conference. “A King of Leinster elopes with (or kidnaps!) a rival king’s wife and ends up ousted from his realm by the High King of Ireland. Hungry for revenge, he sails overseas to enlist the help of yet another monarch, Henry II King of England and Duke of Normandy, and returns with an army of Norman mercenaries.”

The Norman Invasion had begun and Ireland was changed forever. Many of the new invaders were French-speaking and they helped forge new relations between Ireland and France. They even left their stamp upon the Irish language: Gaelic words like ‘garsún’ and ‘eaglais’ come directly from the French ‘garçon’ and ‘eglise’, finding their way into Irish from the speech of these new settlers. They also left the Irish with a taste for good French wine which was to feed the smugglers trade for centuries!

The Conference is being organised by local community group Ferns Heritage Project, a Sub Committee of Ferns Development Association. It will explore the various dimensions of the events of this turbulent period of Irish history and will reveal new findings from the most recent geo-physical study of the ancient monastic centre.

Archaeologists and historians from Ireland and Scotland, all experts in their individual fields, will deliver papers on topics ranging from Gaelic royal landscapes to Anglo Norman settlement and William Marshal, the greatest knight in Christendom. Speakers will include Dr. Edel Bhreathnach, CEO, The Discovery Programme; Gerard Dowling, also of The Discovery Programme, who led the recent geophysical project in Ferns; Professor Elizabeth Fitzpatrick, University College Galway; Dr Stephen Harrison, University of Glasgow; Dr Adrian Empey, an expert on William Marshal, and Dr Eamonn McEneaney, Waterford Museum of Treasures. Question and Answer sessions will give conference attendees a full opportunity to participate.

The conference will take place in Ferns Castle Visitor Centre on Saturday, March 12th. Because seating is limited, with just 50 seats available, booking is essential and seating will be allocated on a first come first served basis.

Conference fee €25 (including lunch). Optional extras include a Conference Dinner on Saturday evening at a cost of €25 and Field trips on Sunday @ €15.

For more information and to book your place email: fernsheritageconference@gmail.com or ph 087-4189740. 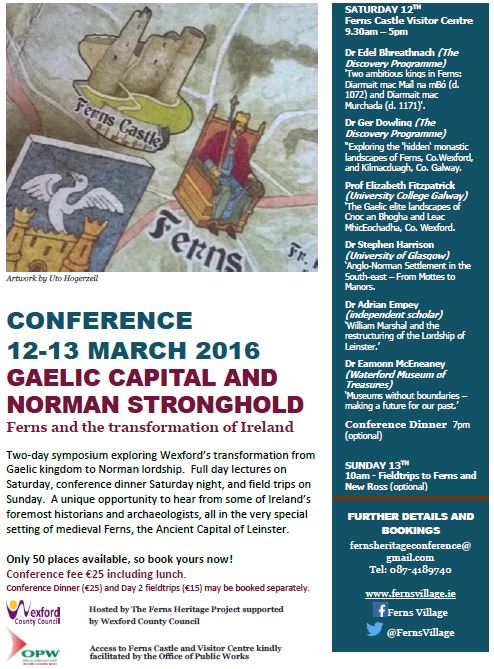 This event is hosted by The Ferns Heritage Project and supported by Wexford County Council.