Did you know the story of Patrick d’Arcy, 18th century Galway-born Irishman who moved to France to study mathematics and discovered the angular momentum, a key concept in physics and engineering? 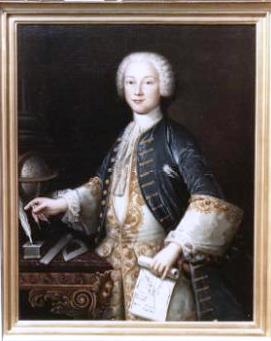 Patrick d’Arcy (27 September 1725 – 18 October 1779) was born in Co. Galway in a Catholic family. He was sent abroad by his parents to an uncle in Paris, to avoid the penal laws (laws imposed by the British government to disempower the catholic majority in Ireland). In France, he was tutored in mathematics by Jean-Baptiste Clairaut, for which he showed great talent. Aged seventeen, he presented two memoirs on dynamics at the Académie Royale des Sciences. To celebrate this exploit, the French painter Hubert Drouais drew his portrait. In 1756, he was naturalised French by Louis XV.

Patrick d’Arcy also had an illustrious military career in the French army : enlisting as a captain in the Condé Regiment, he campaigned in Flanders and Germany. He fought at Fontenoy in 1745 and was aide-de-camp to Marshal Saxe. He was made Commandant of the Order of St Lazarus and Mount Carmel.

In 1779, aged fifty-four years old, he died of cholera. He was replaced in the Académie Royale des Sciences by his friend Nicolas de Condorcet, who wrote his Eloge. Patrick d’Arcy discovered the angular momentum, a key concept both in physics and in engineering.