Home > Culture and Science > Sciences & innovation > Who we are : the Scientific and Academic Service > Our past events and archives > Events: archives > 2014 Events > Public Lecture by Cedric Villani 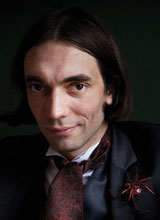 On Thursday 16 October 2014, Cedric Villani, Professor at the University of Lyon and Director of the Institut Henri Poincaré will give the annual Hamilton lecture. Villani, internationally renowned for his scientific work in partial differential equations and mathematical physics, will give a public lecture entitled Thinking the unaccessible — Large time behaviours, from infinitely small to infinitely large to infinitely long. Villani has been the director of Institut Henri Poincaré since 2009. His main research interests are in kinetic theory (Boltzmann and Vlasov equations and their variants), and optimal transport and its applications.

He has received several national and international prizes for his research, in particular the Fields Medal, awarded at the 2010 International Congress of Mathematicians. Since then he has served as a spokesperson for the French mathematical community in media and political circles.

The lecture is kindly supported by Arup and the Irish Times.Venue: Burke Theatre, Trinity College, Dublin 2 Date: Thursday 16 October, 19:00 This is a free, public event but pre-registration is recommended at the following link: www.ria.ie