Home > Culture and Science > Sciences & innovation > Who we are : the Scientific and Academic Service > Our past events and archives > Events: archives > 2014 Events > Public Lecture by French Astronaut Léopold Eyharts 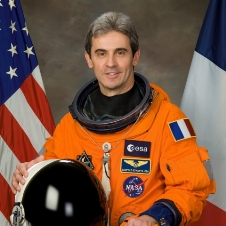 On Tuesday, September 16th at 6 pm the French astronaut Léopold Eyharts will give a public lecture at the Paccar Theatre of the Science Gallery (Trinity College Dublin). He will talk about his exciting career as an astronaut, including his missions to MIR, the ISS and on the Shuttle.

Léopold Eyharts is a French astronaut of the European Space Agency. His first spaceflight was to Russia’s Mir space station in 1998. During this French–Russian ‘Pegase’ mission, he ran experiments in medical research, neuroscience, biology, fluid physics and technology. Léopold’s second spaceflight was an almost two-month mission to the International Space Station to deliver Europe’s Columbus laboratory in 2008. He returned to Earth with Space Shuttle STS-123. He was the second ESA astronaut to become a resident International Space Station crewmember.

Léopold has been decorated as Officer of the French Légion d’Honneur and Chevalier de l’Ordre National du Mérite. He was awarded the Médaille d’Outre-Mer, the Silver Medal of the Défense Nationale and the Russian medals for Friendship and Courage. This public lecture is organised by the Science Gallery, Skytek and the School of Physics of Trinity College Dublin.

This is a free, public event but pre-registration is recommended at the following link: https://dublin.sciencegallery.com/events/2014/09/publiclectureastronautleopoldeyharts 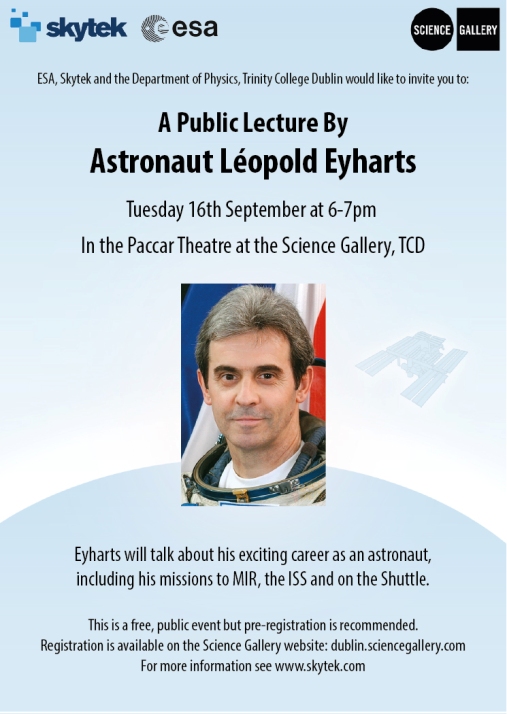