Publication of the book: "Paris: Capital of Irish Culture" [fr]

What influence did Paris and France have on the evolution of Irish political and cultural thought? The newly published “Paris: Capital of Irish Culture” recalls the importance of France and Ireland’s shared history and how intellectuals, soldiers, politicians, authors and artists have been written into a unique history which has enlivened both our countries.

We are delighted to announce the publication of the volume Paris: Capital of Irish Culture edited by Kevin Whelan and Pierre Joannon and published at Four Courts Press, 2017.

This volume explores the influence of Paris and France on the evolution of Irish political and cultural thought from the 18th to the 20th centuries, exploring how the convergence between the two countries fed into the reimagining of Ireland in a cultural and political sense. In the second half of the nineteenth century, Paris loomed large in the wider European imagination. Paris functioned as a political capital for Irish republicans, and a centre of attraction for Irish writers, artists and scholars. This Parisian political link stretched from the Jacobites, through the United Irishmen to the Young Irelanders and the Fenians. Paris exerted a powerful influence on Irish writers, ranging from Lady Morgan to Thomas Moore, George Moore, James Joyce, Samuel Beckett and Derek Mahon. 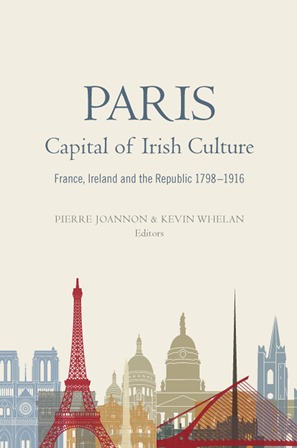 This book is the result of Paris: Capital of Irish Culture, a set of twin conferences which took place in Paris and in Dublin in 2016 within the framework of the 1916 Centenary and with which the Embassy was proud to be associated, together with the Embassy of Ireland in France, the Keough-Naughton Notre Dame Centre Dublin, the Irish Cultural Centre in Paris, the Jefferson & Michael Smurfit Monegasque Foundation.

Pierre Joannon is the author of many books on the relations between Ireland and France. Kevin Whelan is Director of the University of Notre Dame Global Gateway in Dublin.

More about the book on the Four Courts Press website