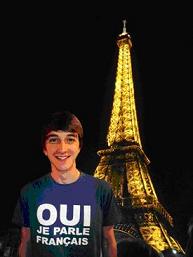 “Allons en France “ was absolutely incredible !! It was one of the greatest experiences of my life !! I have made so many friends, who all come from various countries : Latvia...Iceland...Mozambique...Czech Republic...Norway and Kenya. I’m thrilled that I’ve met these people because I can continue to practise my French with them online through Facebook. Everyone on the course was extremely friendly and the leaders were very patient, organised and helpful.

I felt sick for the first two days due to homesickness as everything was different and strange, but as I settled in, the trip became more enjoyable and relaxing. I was kept active all the time and it was rare that one wasn’t exhausted at 9pm each night. Rising at 7:30am each morning I learned to worship the yellow and orange coupons that entitled us to free food in the canteen. I truely believe that this trip was excellent preparation for university life as one had to fully embrace independence and confidence in one’s own ability to be responsible to eat, sleep and prepare for the coming day.

Transporting 158 teenagers to each venue on the Metro, on a bus, on foot every single day was a challenge that the leaders mastered marvelously. They really must be commended for all the hard work and effort that they did in taking care of us.

As the stay was themed around Olypicism and Olympic values we engaged in numerous sporting activities such as Handicap Basketball, Mountain Biking, Scooter Races, Orienteering and Accrobranches.

We had many workshops on sport...Olympic values and we visited the International Sports Institute of France. There we just happened to meet a world champion of Taekwondo, who gave us a spectactular workshop in Attack and Defense.

Watching the youth Olympics in, "Le Stade De France," was amazing. Usain Bolt won the race and everyone in the stadium got really excited. It was class ! I found it funny too because we constantly did the Mexican wave and succeeded in forcing all other spectators to join in. We also had yellow posters, folded like a fan, with which we made clapping noises instead of using our hands, which I thought was both innovative and bizarre.

Paris was beautiful. The Eiffel Tower is even more stunning when it is illuminated and glistening with hundreds of tiny lights like jewels during the night. Witnessing this on "Les Bateaux Mouches" was mesmerizing...It’s easy to see why Paris is adored by many couples on their honeymoon.The open bus tour gave me a great chance to snap some pics of Paris. I must confess that I took more than 600 photos during the trip ! One night we went to Montmarte where we did some shopping and saw the impressive Sacre Coeur, Moulin Rouge and Café de 2 Moulins.

My favourite two days were when we travelled to Annecy and Chamonix.

The weather was fantastic in Annecy. The dazzling cerulean lake, the traditional styled town and the meal in a small bistro were just brilliant ! We all were tan after that venture. We dispersed into the town in small packs of 7 and the locals were overjoyed as all the 110 girls on the trip purchased clothes like mad due to the sales and bargains in each little boutique.

Chamonix was spectactular ! Ascending Mt. Blanc in a cable car, up into a parnorama of freezing, white snow, was an unforgettable experience. Visiting La Mer De Glace was my most cherished event. Entering the ice tunnels was exhilarating and cold....so very cold. I found it shocking to observe how much the glacier has actually receded in the past decade. I suppose that part of the journey was more environmentally enlightening than anything, but still it was awe-inspiring.

I don’t know if you heard or not but...On the 4th last day we went to an adventure centre outside Paris and I hurt my ankle doing les accrobranches. I felt no pain until the next night because we went to a dance organised by the firefighters of Paris and I danced on my hurt foot and then it swoll up like a balloon ! A leader named Marione took me to a hospital in Paris the next morning, Bastille day, where I stayed for 7 hours until the doctors made sure that there were no fractures on my X-ray. Afterwards Marione took me to a crêperie near Montparnasse and I had a beautiful meal. She was an angel ! She had great patience and I’d have been lost without her. After that I got some medication and a bandage for my ankle and I could enjoy myself again. I was disappointed that I had missed the military parade but the fireworks at the foot of the Eiffel Tower that night made up for it.

The final night, on the 56th floor of the Montparnasse tower, was an exquisite send off. Each participant was dressed in his or her country’s traditional costume. I had searched previously but I couldn’t find a male traditional Irish outfit so I just went for a formal shirt and tie approach. The hosts had made a spread of delicious treats on a massive buffet table. I’d never eaten caviar before but I have to say that...it wasn’t terrible.

The leaders always took good care of me. On the way home I think I was met by the French Embassy/Irish Embassy...I’m not sure...and a man wheeled me through Charles De Gaule in a wheelchair....it was a good thing too because I’d have missed my flight otherwise. On the way home I got to fly in Business class...it was so nice. My parents met me at Dublin airport and took me home. I’ve been resting at home since and my ankle has almost healed completely.

I want to thank the French Embassy for this opportunity. It was such a great chance to learn about other people’s cultures. I think that my spoken French has improved immensely as a result of this trip. I understand now why so many people say that immersion is the best way to develop your oral skills in a language. I also want to thank Allons En France pour tous les choses qu’ils ont fait pour moi.

France is in my memory forever and I’ll look forward to returning sometime when I’m older. I’m proud to say "Oui je parle francais !" and I hope that next year’s winner has as memorable a time.