An exceptional longevity Despite their small size, bats live and age slowly. But why is that? This is what the AGELESS project, funded by the European Research Council and hosted by University College Dublin, is trying to find out. Bats are the only mammals which, despite their small size, age so slowly. In fact, highlights Dr Emma Teeling (principal investigator), there is a direct correlation between life expectancy and body mass among most mammals. So, while mice and rats can survive a year or two in the wild, some bats can make it past their forties. The researchers want to compare human and bats DNA sequences and look at any chemicals that change in bat blood over their lifespan and understand which genes are activated or desactivated as the organism grows older. One of the hypotheses developed by the researchers lies in the DNA repair mechanisms. Since they split away from the ancestor that they shared with humans some 90 million years ago, bats may have evolved more effective DNA repair mechanisms because of their unusual ability for sustained flight – some bats can fly up to 1 000 kilometres in a single night. However, flying generates toxic by-products. That is why they may have developed unique mechanisms such as more effective telomeres, which are parts of the chromosome which can protect the DNA sequence from deterioration when cells replicate. 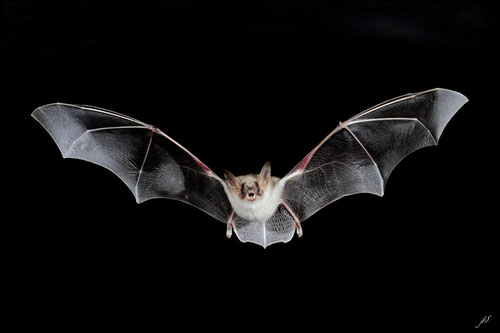 Brittany to the rescue One challenge in this project which began in 2013 was to find suitable test subjects for the study, to be able to follow each specimen over a substantial portion of its life. Researchers needed bats living in the wild, as raising them in captivity tends to reduce their lifespan. The Irish researchers contacted a nature conservation group “Bretagne Vivante” from Brittany (North-West of France), which has been studying colonies of greater mouse-eared bats living in Brittany. The group is now collaborating and following five colonies of greater mouse-eared bats living in Brittany: 300 animals on which electronic transponders have been implanted to identify them and track their movements across the seasons. Each year, the specimens are weighed, their wingspan measured and a blood sample is taken to study their genetic sequencing.