The implication of the Paris Beaux-Arts school [fr]

How the Paris Beaux-Arts school became involved in the France-Irlande memorial. 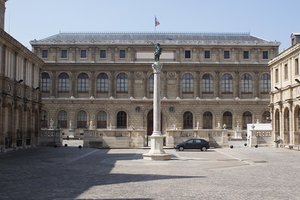 When the Paris Beaux-Arts commemorated the Armistice of the Great War on 11 November 2015, little did it know that, two days later, on 13 November, it would be directly affected by the attacks in Ile-de-France that same day, when one of its students was killed in the Bataclan.

Those attacks reminded generations who have enjoyed several decades of peace of the naivety of believing in an everlasting, effortless peace, and of the particularly heavy price paid by young people in conflicts. The course of events also served as a reminder – if this were necessary – of the importance of monuments, which, as the etymology suggests, “remind” people and turn their thoughts towards something or someone.

So the Beaux-Arts did not hesitate for a second when Jean-Marc Todeschini, Minister of State for Veterans and Remembrance, asked it to design, as part of the First World War centenary, a monument in Dublin’s Glasnevin cemetery to Irish people who fought for the defence and freedom of France during the Great War in particular.

Patrice Alexandre, a professor of sculpture at the Beaux-Arts, and five students from his workshop – Anaïs Ang, Cécilia Breuil, Hadrien Gunther, Alexander Raczka and Théophile Stern – agreed to build a memorial in a very short space of time, both as a tribute to those who died and a eulogy to a Europe which gave us a half-century interlude of peace, whose unprecedented nature must not be underestimated.

This commission, the first of its kind in the Beaux-Arts’ history, enabled the creation of a new pedagogy based on specific know-how, with all the challenges linked to erecting a monument. Analysing these challenges, in the early stages of the project and at the site itself, helped raise awareness among the young artists and train them in a unique intellectual and artistic initiative.

The interplay of Irish and French culture in a single space evokes a momentous trajectory of which the Great War is the cornerstone. For the monument, two highly symbolic elements were chosen jointly by the French Defence Ministry and Office of the Minister of State for Veterans and Remembrance, the Department of Arts, Heritage, Regional, Rural and Gaeltacht Affairs, the Glasnevin Trust and the French Embassy in Ireland: the Ginchy Cross and the text of an article by Marshal Foch published in The Irish Times in 1928, which pays tribute to the bravery of Irish volunteers during the First World War.

This cooperation is intended to show that the Ecole des Beaux-Arts remembers the anguish of the time by commemorating our European compatriots who died in past conflicts. It is also a tribute paid by young French people to the strong solidarity expressed by Irish people following the terrorist attacks that hit France in 2015 and 2016.