Home > Culture and Science > Sciences & innovation > The Ulysses scheme > Stories of French-Irish collaborations > Portraits of researchers > Archeology: which links between France and Ireland?

Archeology: which links between France and Ireland? [fr]

France could have played a role in introducing metallurgy to Ireland during Prehistory... but which one? This is what PhD student Aurélien Burlot is trying to find out.

"In 1999, at 19 years old, holding a pastry arts degree, I came to Ireland to work in a renowned restaurant in Youghal, Co. Cork. After a few years and having started a family, I decided to stop cooking and to do something else. Finally, in 2011, I joined University College Cork to learn about archeology, a subject that had always fascinated me. After obtaining my Bachelor degree in 2014, I decided to continue my studies with the prospect of doing a PhD. I began a MPhil degree at the archeology department in UCC, with the option, after a year, of an upgrade to PhD. This was done in December 2015, with the submission of my thesis expected for December 2018. My thesis is about prehistoric relations between Ireland and France during the 3rd millennium BC. More specifically, it is about understanding the role played by north-west Atlantic France (Brittany, Normandy, Vendée), in introducing metallurgy to Ireland at the end of the Neolithic period, circa 2500 BC. This introduction of copper metallurgy on the island also corresponds to the apparition of the pan-European Beaker culture, characterised by its very fine and lavishly decorated pottery. This phenomenon is also visible in Armorica at the same period. Metallurgy was already practiced several centuries earlier in some regions of Europe, especially in the Iberian Peninsula and in the Languedoc region. However, the Beaker trend along the Atlantic coast seems responsible for introducing metallurgy to Armorica and to Ireland. The south-west of Ireland is quite rich in copper deposits, contrary to Armorica, and according to modern chemical analysis it would seem that Irish metalwork was exported to France from 2500 BC. Even more interesting, we now know that this Irish copper comes from the Beaker mine at Ross Island, near Killarney, Co. Kerry. Another aspect of these prehistoric relations, concerns some megalithic tombs, or dolmens, from these two regions. Indeed, around 2 400 BC, a new megalithic style developed in Ireland, with the building of wedge tombs (fig.1). These structures look a lot like Armorican allées couvertes. Despite chronological differences – allées couvertes being older – the monuments share a lot of architectural similarities and the fact that Beaker material was found in both types, indicates a common ideology. 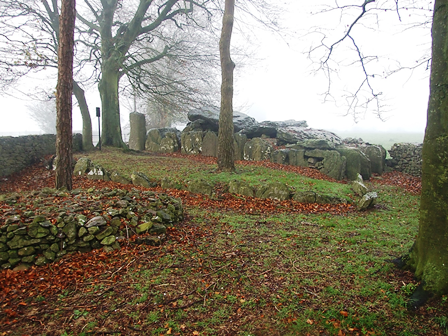 In 2016, I obtained a National University of Ireland grant which, for one year, will allow me to travel to France to study some monuments and access museum collections, to establish material and monumental similarities. All of to understand the role of Armorica in the introduction of metallurgy to Ireland, during what was an important period of cultural and technological changes in western Europe."