The latest phase of the Ulysses research funding programme was launched the 2nd of September. This programme is designed to support new research collaborations between Irish and French researchers. It is named Ulysses after James Joyce’s famous novel to celebrate the Joycean links between Ireland and France.

Now in its sixteenth year, the Ulysses programme continues to support Irish and French researchers across a range of mutually important areas. Collaborations have often continued long after the Ulysses award has finished, and in many cases lead to further research funding. Successful researchers will each receive up to €2,500 to spend a short period in the other country to carry out their research. 285 projects have been funded previously and Ulysses provides a crucial mobility experience for early stage researchers.

A recent example of the success of Ulysses is the collaboration between the University of Limerick and the University of Limoges, led by UL researcher Gordon Armstrong. Funded by Ulysses in 2012, a collaboration was established between the Irish Centre for Composites Research and Materials & Surface Science Institute and the Ceramics Processing and Surface Treatment Laboratory. The project aim is to develop a method of applying wear-resistant ceramic-metallic (‘cermet’) coatings to an aerospace-grade composite material in order to save weight in next generation aircraft. Such a development will reduce fuel consumption, operating costs and environmental impact and can be used in aircraft such as the Airbus A350, Boeing 787 and Bombardier C-Series. 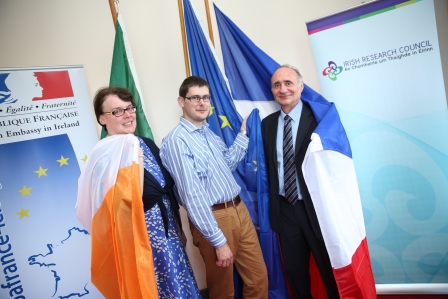 Dr Eucharia Meehan , Director of the Irish Research Council, Dr Gordon Armstrong, Researcher at the University of Limerick, Dr Claude Detrez, Attaché for Scientific and Academic Cooperation at the Embassy of France in Ireland at the Ulysses research programme launch 2013

The collaboration has already led to several positive outcomes: the project team received the ANORAA trophy for 2013, awarded by the National Association of Reserve Officers of the French Air Force (l’Association Nationale des Officiers de Réserve de l’Armée de l’Air) for innovative applications of benefit to the aerospace sector. The project team also secured funding from the Conseil Regional du Limousin for a PhD student to continue their research programme.

“The Ulysses award provided us with an ideal basis on which to build a concrete collaboration, and I look forward to us building on this working relationship well into the future” said Armstrong at the launch today.

Ulysses is managed (in Ireland) by the Irish Research Council and the French Embassy, and (in France) by Campus France, the French exchange agency. Details of the application process can be found on www.research.ie and www.ambafrance-ie.org.The closing date for applications is 7th October.