What are solar storms? Where do they come from? A collaboration started with a Ulysses grant has allowed a French-Irish team to explore the sun-earth connection and understand these questions.

The Sun provides the light and heat that makes life possible on Earth, but from time to time, it produces huge explosions of hot gas, called solar storms. At Earth, these solar storm can produce dropouts in GPS signals, interruptions in communication systems, and damage to satellites.

This Ulysses project brought together researchers from Trinity College Dublin and the Observatoire de Paris, two leading groups in international solar physics. The group at Trinity developed a method to estimate the properties of the solar atmosphere, which when combined with radio images from the Nançay Radioheliograph in France and the International Low Frequency Array (LOFAR) Telescope, helped us to understand solar storms and the bursts of radio waves that sometimes accompany them. 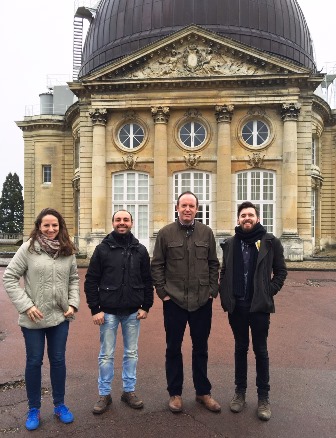 The results of this work were published in the leading European journal in this field, Astronomy & Astrophysics (Morosan, Zucca, Bloomfield, Gallagher, A&A, 2016) and at the European Geophysical Union General Assembly in Vienna in April 2017 (Zucca et al., 2017). In addition, Professor Gallagher at Trinity and Dr. Karl-Ludwig Klein at Paris recently submitted a major proposal to Horizon 2020 to design the world’s largest low frequency solar radio telescope. All as a result of Ulysses.

As a testament to the strong research links between French and Irish researchers in solar physics, Professor Gallagher was recently appointed a Chevalier de Palmes Académiques for his on-going collaborations with Observatoire de Paris and the European Space Agency in Paris.