This 38th edition of EVA International has been curated by Inti Guerrero (b. 1983, Bogotá, Colombia) and will open to the public from 14 April to 8 July 2018. The exhibition connects the narrative futures of early twentieth century Ireland with the sexual and identity politics of the present day. Key themes include: electricity; light; trauma; the body; nationhood; and religion. 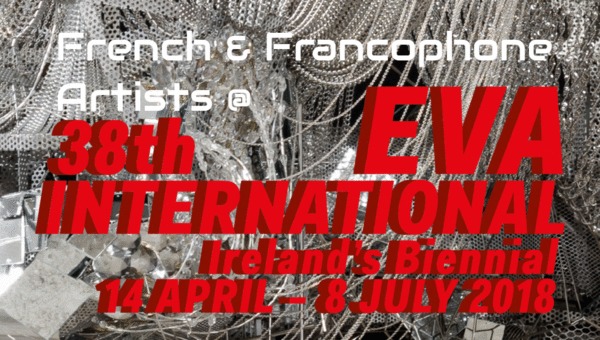 With the support of the French Embassy in Ireland and the Institut Français, EVA International presents the works of French and Francophone artists including Dominique Gonzales-Foerster, Malala Andrialavidrazana, Steven Cohen, Laurent Grasso and Marie-Claire Messouma Manlanbien.

The exhibitions will be presented in a mixture of gallery and non gallery spaces, including Cleeve’s Condensed Milk Factory, Limerick City Gallery of Art, The Hunt Museum, The Franciscan Church. A programme of events and performances will directly engage audiences, including artist talks, tours, and other immersive events.

(b. 1962, South Africa) is visual and performance artist living in Lille, France. His works are staged in the public realm as well as in theatre/gallery spaces and are derived from his identity as a white South African gay male. Cohen participated in residencies at the Baryshnikov Arts Center and the Center or Performance Research in New York. Notable exhibitions include: Under Pain of Death, Austrian Cultural Forum (2008); Dada South?, South African National Gallery, Cape Town (2009-10); ARS 11, Kiasma Museum of Contemporary Art, Helsinki, and No Fashion Please: Photography between Gender and Lifestyle, Vienna Kunsthalle (2011). @ Limerick City Gallery of Art (Pery Square, Limerick)

(b. 1972, France) explores sciences through electromagnetic energy, radio waves, and naturally occurring phenomena as they apply to paranormal activity. This was a favourite subject of 18th-century scientists and philosophers, often used as parlor entertainment during the Victorian era. Grasso was awarded the Marcel Duchamp Prize in 2008 and is the subject of a major monograph Laurent Grasso: The Black-Body Radiation published by les presses du réel. Recent solo exhibitions have included The Horn Perspective at the Centre Pompidou and Gakona at the Palais de Tokyo, both in Paris, France (2009). Grasso was also included in 9th Sharjah Biennial and Manifesta 8. @ Cleeve’s Condensed Milk Factory (O’Callaghan Strand, Limerick)

(b. 1990, France) works across a variety of mediums including drawing, sculpture, painting, video, performance, and installation. In her work, she creates stories and poetic narratives with myriad cultural influences resulting in a "plural identity". Since graduating from Ecole Nationale Superieure des Beaux Arts, Paris in 2016 she has exhibited widely in Paris. @ The Limerick Clothing Factory (Lord Edward Street, Limerick)