On the occasion of Antoin Murphy’s new translation of Cantillon’s Essay, we are happy to present a short portrait of the story of the Irish economist, whose work "Essay on the Nature of Trade in General", written in French, influenced modern economy. 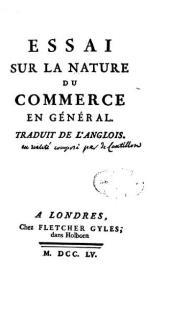 The new translation into English of Richard Cantillon’s Essay on the Nature of Trade in General by Antoin Murphy, Professor Emeritus in Trinity College Dublin, is being published today. Richard Cantillon was an Irish economist who lived in France and wrote his work in French.

18th century Irish economist born in Co. Kerry, Richard Cantillon migrated to France where he made his fortune: he became a millionaire in the Mississipi System (1720). Between 1728 and 1730, he wrote in French his unique work Essay on the Nature of Trade, posthumously published in 1750. This work, which in particular highlights the role of entrepreneur and spatial economic, had a considerable influence on modern economic thinking: Richard Cantillon is quoted by authors such as Adam Smith (in The Wealth of Nations) and Jevons considers his Essay to be the "cradle of political economy" (in Richard Cantillon and the Nationality of Political Economy).

According to Antoin Murphy, Richard Cantillon “was not some ivory-towered theorist but rather a battle-hardened accountant, entrepreneur, banking and financial trader” who “knew the world of money, banking, and financial institutions intimately”. He could easily “[identify] the fault lines of both the Mississippi System and the South Sea scheme, enabling him to make a fortune from both of these stock market bubbles.” Finally, adds Antoin Murphy – and most importantly – “he had become such an expert on shorting financing markets and currencies that he could have given masterclasses to many modern exponents of such strategems.”

Cantillon’s Essay can be found in French here

The article about Antoin Murphy’s translation can be found here