Lucien Bull is a pioneer of chronophotography. Born in Ireland, he moved to France and together with Etienne-Jules Marey helped developing motion picture cinema.

Born in Dublin in 1876, to a British father and a French mother, Lucien Bull moved to France in 1894 and became an assistant to Etienne-Jules Marey in 1895. Marey was a French scientist, physiologist and chronophotographer who was working on the cinematographic at the time. He was studying how the human body works and felt that by capturing human movement on film, he could expand scientific understanding in this field. The cinematographic, the “gun camera”, was shaped like a rifle and took pictures of moving objects from a rotating plate. The camera was designed to investigate the study of motion. Marey’s camera was the forerunner of the motion picture cinema.

With Marey’s early cameras the film had to stop to be exposed, this means that there is a limit to the number of exposures that can be achieved per second. Bull managed to develop a camera where the film is no longer halted and moves continuously, while the subject is illuminated many times per second. The first successful film was achieved in 1904, when Bull managed to film the flight of a fly at 1,200 frames by seconds – a success Marey could not witness, as he died earlier the same year. With Bull’s high-speed version of the camera, it became possible to photograph projectiles such as a he managed to obtain photographs of insects in flight and also of ballistic projectiles. By 1918, it was up to 50,000 images per second and in 1952, Bull was recording one million images per second.

After Marey’s death, Bull became head of the Marey Institute (part of the Collège de France – a renown higher education and research French institution). He was naturalised as a French citizen in 1931. In 1933, he was put in charge of research at the National Office of Research and Invention in France (which is now the French National Centre for Scientific Research). In 1948, he became President of the Institute of Scientific Cinematography in Paris. He died in Paris in 1972. 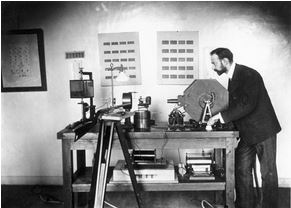 Bull’s film of a bullet piercing a soap bubble

Bull’s film of the flight of an insect

A Universcience movie about Lucien Bull (in French)

See also wikipedia and Our Ireland