France and Ireland together favour a political project for Europe based on shared values, at the service of European citizens, and providing peace and prosperity.

Read this opinion piece on the Irish Times website. 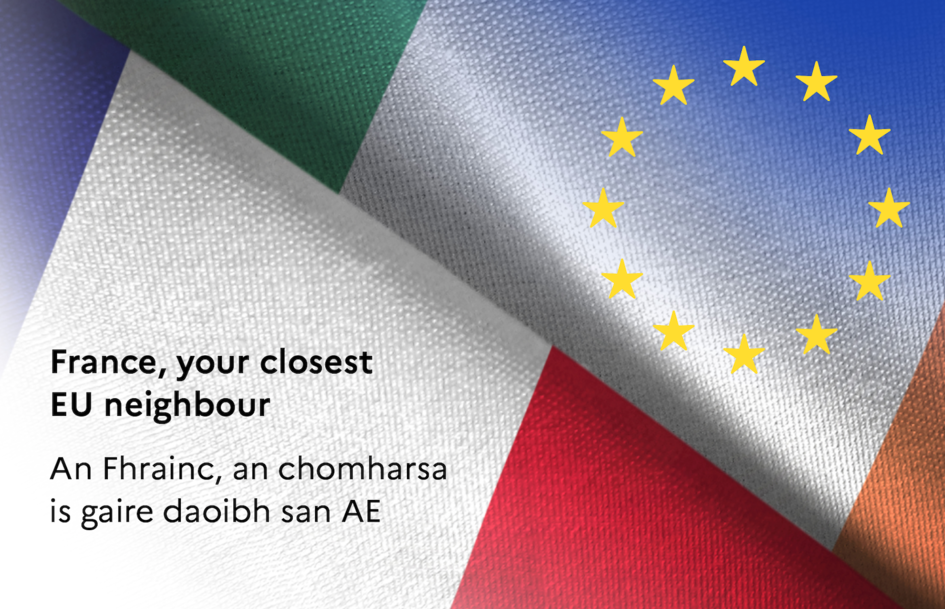 January 1st 2021 marked a new stage in the strengthening of the relationship between France and Ireland. At midnight last Thursday, the end of the Brexit transition period confirmed the United Kingdom’s withdrawal from the European Union. This departure was the British people’s choice. We regret it, but we respect it.

Brexit will have serious and significant consequences for our fellow citizens and our economies, both immediate and in the long term. No other European Union Member State will experience those consequences more directly than Ireland. That is why France, together with the other Member States, showed solidarity with Ireland throughout the negotiations with the UK. And in this new, 27-strong Europe, as President Michael D. Higgins so rightly says, France is now Ireland’s closest neighbour within the European Union. And Brittany is the French region closest to Ireland. I am particularly sensitive to this, having served as an elected representative there. I have many personal memories connected to Ireland, especially of the Inter-Celtic Festival in Lorient, a town where I was for a long time mayor.

The deep bonds of friendship between our two countries are indeed rooted in history and have constantly been strengthened over the centuries. We do not forget that many Irish soldiers have fought in the ranks of the French army, from the Flight of the Wild Geese in the 17th century to Samuel Beckett’s role in the Resistance during the Second World War.

The cultural ties uniting France and Ireland are also very close : French is the first foreign language taught in Ireland, and France the leading destination for Irish Erasmus+ students. As for the French, they make up by far the largest contingent of European students in Ireland. Ireland joined the Organisation internationale de la francophonie (OIF) in 2018, thus acknowledging that openness to the world is also expressed in French. In the footsteps of James Joyce, Samuel Beckett, Oscar Wilde and W.B. Yeats, many Irish writers have found inspiration in Paris. I would like us to further extend our academic cooperation by strengthening the partnerships between French and Irish universities.

This new closeness is reflected in a larger number of direct sea links between our two countries, benefiting the smooth operation of the European single market. It will also take physical shape in the Celtic Interconnector, the 700-MW electricity cable which will link our two countries from 2026 onwards and encourage the development of renewable energy. A hundred and fifty French businesses currently have branches in Ireland and employ nearly 12,000 people, a sign of our dynamic economic relationship. It is our ambition to do more, and I would like us to think together about a partnership for sustainable development, with a view to cooperating on offshore wind power, on the sustainable management of cities and on adapting our societies, economies and agriculture to the reduction of greenhouse gas emissions and the protection of biodiversity.

We can also cooperate more on the digital economy, where Ireland has become a major player in the EU. French tech start-ups are looking to Ireland to develop and forge partnerships.

Our regions and cities aspire to cooperate more in order to address common challenges together.

On the European and international stage, France and Ireland are both fundamentally committed to upholding human rights and the rule of law. In this regard, I welcome Ireland’s election to the United Nations Security Council for the 2021-2022 period : it can count on France’s support in promoting multilateralism.

The solidarity between our two countries will continue within the European Union, where our interests and positions are similar on many issues, including protecting the Good Friday Agreement and peace in Northern Ireland. A year ahead of France’s presidency of the Council of the European Union, beginning in January 2022, France and Ireland together favour a political project for Europe based on shared values, at the service of European citizens, and providing peace and prosperity.

France and Ireland plan together to write a new chapter in their relationship ; two neighbours closer than ever which share a common destiny within a stronger, more mutually supportive and more sovereign European Union.