On the occasion of the 100th anniversary of Thomas Kettle’s death, the French Embassy is proud to support the seminar organised by University College Dublin on Friday 9th September.

The Seminar Thomas Kettle Centenary will be held on Friday 9th September 2016 in UCD, to mark the centenary of the death at Ginchy in the Somme (France) of Thomas Michael Kettle, Professor of National Economics at University College Dublin and sometime MP for Tyrone East. Thomas Kettle constitutes one of the leading UCD academics to have been involved in national life both through politics and literary achievement.

This event will explore the contribution of Tom Kettle to Irish history and also examine his work as a scholar, writer and poet. There will be the unveiling of a memorial plaque to honour the life of Thomas Kettle in the Rose Garden.

This seminar is organised by University College Dublin, in partnership with the French Embassy and Poetry Ireland. Poetry Ireland will organise a special event of its ‘Poetry Aloud’ series to coincide with this event Registration & more information here 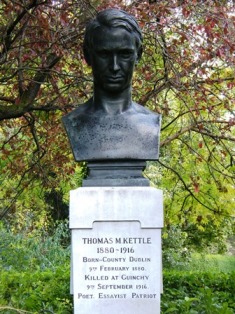 About Thomas Kettle Born in Co.Dublin, he was a nationalist, economist and poet. He was elected Nationalist MP for East Tyrone (now North-East Tyrone constituency) from 1906 to 1910, when he resigned from Parliament for whole-time professorship. He established and chaired the Peace Committee during the Lock-Out Strike of 1913, with Joseph Plunkett and Tom Dillon as co-secretaries. Joining the newly-formed Irish Volunteers, Kettle was sent to Europe to raise arms, where he witnessed the outbreak of war and acted as a war correspondent. This first-hand experience confirmed his belief in the importance of fighting for democracy. On returning home, he volunteered to serve with an Irish regiment and, although poor health limited his role to recruitment, he continued to advocate Home Rule and for Irishmen to make a united stand against Germany. He was killed on the Western Front on 9th September 1916, in Ginchy at the battle of the Somme.

A memorial bust by Francis W. Doyle-Jones (d.1938) is in St. Stephen’s Green. It bears the last lines from his poem To My Daughter Betty..: ‘Died not for flag, nor King, nor Emperor, But for a dream born in a herdsman’s shed, And for the secret scripture of the poor.’