On Friday 2nd June 2017 was held a special symposium was held to honour Françoise Henry, a French art historian who worked and lived in Ireland and contributed to found art history as a discipline in Ireland.

On Friday 2nd June, at the Royal Irish Academy of Ireland, was held a symposium on Françoise Henry, French art historian (1902-1982) who worked and lived in Ireland. The conference was organised by the University College Dublin (UCD) School of Art History and Cultural Policy with the support of the Embassy of France in Ireland, the UCD College of Arts and Humanities and theRoyal Irish Academy. Dr. Laurent Olivier, keeper at the Musée des Antiquités nationales de Saint-Germain-en-Laye, was among the distinguished speakers.

The day ended with the inauguration of the Françoise Henry room in the Alliance Française of Dublin. 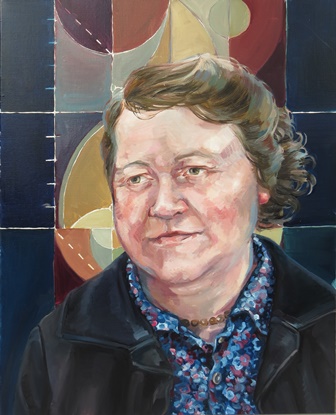 Who was Françoise Henry ?

Françoise Henry was a French art historian who founded art history in Ireland. After defending her thesis on Irish sculpture at the early Christian era, she was appointed lecturer at the French department in University College Dublin before joining the Department of Archaeology in 1948. Her main work is the publication of three volumes on Irish art and the publication of The Book of Kells and its Decoration, in 1974, where she identified at least three copyists of the Book of Kells. She received many awards, among which the Légion d’Honneur, the French highest honor which was presented to her to honour her war services : she contributed to evacuated French museum collections and was a medical corps ambulance driver. In 1949, she was one of the first four women elected at the Royal Irish Academy. She also received honorary doctorates from University College Dublin (1963) and National University of Ireland. 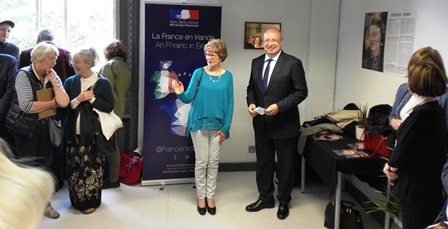 There is a diversity of tributes to her and her work, notably a bust, by the sculptor Dhomhnaill O’Murchu on display at the National College of Arts and Design, and a portrait, painted by Vera Klute, on display at the Royal Irish Academy. A library in UCD holds her name and many of her books and each year, since 1988, UCD has been delivering two « Françoise Henry Memorial Medals » to the undergraduate students who take first and second place in Art History. 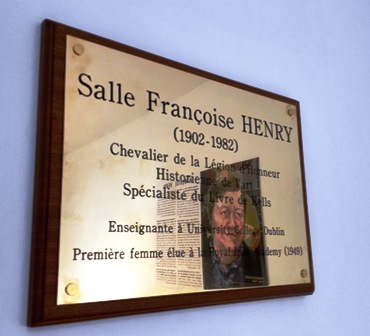 In addition to these existing tributes, the Embassy of France in Ireland proudly named one of the Alliance Française’s room after her, a small room for a great woman in a place symbolising French culture and French language in Ireland.