The 2nd edition of the Web Series Festival ! [fr]

Not to be missed! The 2nd edition of the Dub Web Fest, Web Series festival, is happening soon! From 18th to 20th November, at Filmbase (Temple Bar, Dublin).

Dub Web Fest, the Web Series festival, comes back for a second year! With the idea of promoting web series, digital content creation around the world, the festival brings together movers and makers of the digital media and technology worlds over the course of three days. A jam-packed programme featuring screenings of series (and two premieres), meetings with actors (exceptional presence of Eddie Jackson, Game of Thrones), creators and filmmakers, workshops (with Ellen Gunning and Clara Rose Thornton) and masterclass (special presence of writer James Moran) that finishes at the Liquor-Room for an after-party! Not to forget, just like last year, a special focus on the French Touch with a screening of French web series on Sunday 20th November at 3.30 pm! Dublin Web Festival @Filmbase, Temple Bar, Dublin 2 http://dublinwebfest.com/ Follow Dub Web Fest on Facebook! Projection "French Touch Block VII" Sunday, 22 November, 15:30 - 16:30 Book your tickets!

The festival is founded by Mikael Thiery, French Filmmaker and Producer based in Dublin, who was selected for the Chicago Irish Film Festival in 2011 and for the 2011 Dingle Film Festival and the LA Web Fest in 2013.

Dub Web Fest is presented in partnership with the Embassy of France in Ireland, Filmbase, BeActive Entertainment, Zanzibar Films andIrish Academy of Public Relations. Some figures on edition 2015: 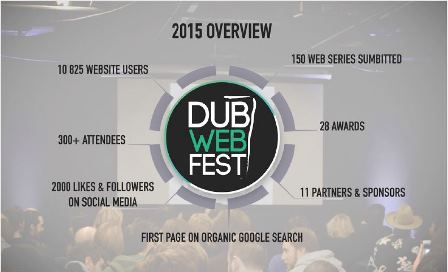