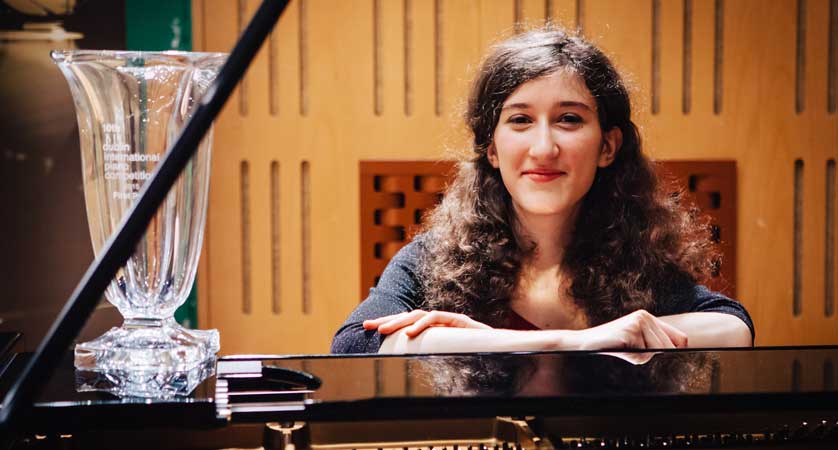 The first ever female winner of the Dublin International Piano Competition in 2015, 20 year old French pianist, Nathalia Milstein, returns to Dublin for her Dublin recital debut in the National Concert Hall on February 17th at 8pm. From an original entry of 64 competitors, Nathalia emerged as the overall winner last year and is currently enjoying an active performing career and is undertaking a number of international engagements that winning this prestigious competition provides.

Born in 1995 to a musical family, Nathalia started playing the piano at the age of four with her father Serguei Milstein. She entered the Geneva Conservatory of Music in 2009, where she obtained her diploma with honours in 2012. Nathalia is a prizewinner of numerous competitions: in 2008 and 2009 she received the First Prize at the ‘Flame’ Youth Competition.

In 2013 she was awarded the Second Prize in the Grand Concours International de Piano in Corbelin (France) and in May 2014, the First Prize in the category ‘Young Pianists’ of the Adilia Aliva Piano Competition in Gaillard, France, in addition to her win in Dublin in May 2015. She has also performed for French television and Dutch radio. For several years, she has been playing with her violinist sister, Maria Milstein, as a duo. Her New York debut in the Carnegie Hall follows on 21st March and her London debut in the Wigmore Hall is confirmed for 30th May 2017. She will also participate in the prestigious ‘Steinway Celebration Series’ in concert halls across Europe in the coming year.

The concert is presented in association with RTÉ lyric fm who are hoping to record it for later transmission. Nathalia’s programme will include Schumann’s charming and graceful Arabeske in C, Op. 18 and one of that composer’s greatest works for solo piano, Fantasie in C, Op. 17 alongside works by the Russian titan composer, Sergei Prokofiev including his magnificent Sonata No. 6 in A, Op. 82.

Tickets for this exciting recital are available from the National Concert Hall Box Office at www.nch.ie and 01 417 0000.